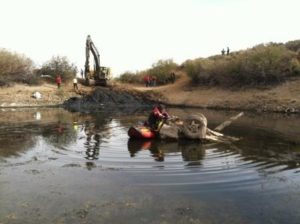 All of the vehicles recovered from Kiowa Pond recently have been identified by the Sheriff’s Office as stolen.

“The most recent reported theft occurred in 2007 (and) the remaining five thefts occurred between 1996 and 1998,” said the Sheriff’s Office in a press statement. “Three of the vehicles were reported stolen in Reno, two from Sparks and one from Sacramento. All agencies involved have been notified of the recovery.”

The vehicles had been a longstanding issue and source of complaints from nearby residents. Low water levels revealed the vehicles and a lot of debris that have been dumped in the water.

HASTY team volunteers to do a training exercise in late October and removed the vehicles. Divers in containment suits attached chains to remove the vehicles from the pond.