Regional Fire Services on The Horizon, Details to Be Negotiated 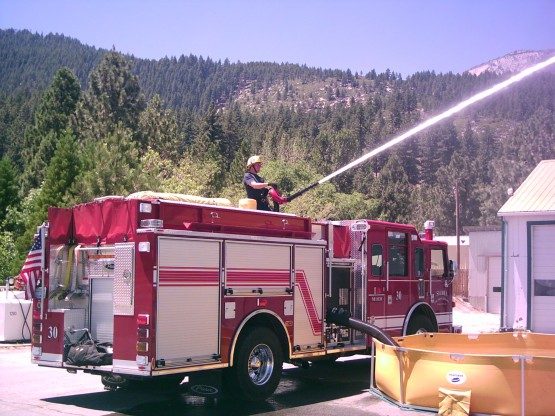 A plan for more cooperative fire services is on the horizon, but important details still need to be ironed out.

A  meeting held today at Reno City Hall contained a load of pandering, pontificating and posturing as the Reno City Council and Washoe County Board of Commissioners heard presentations and asked questions about how the area’s respective fire service agencies could cooperate on fire services.

The meeting is a continuation of discussions arising from legislative bill SB 185, recently signed by Governor Brian Sandoval, ordering the Truckee Meadows Fire Protection District and Reno Fire Department to provide the region with automatic aid.

According to the City, “(the Reno City) Council unanimously approved to direct staff to proceed with negotiation points for development of an automatic aid agreement, asking the City Manager to include the City of Sparks and North Lake Tahoe Fire Protection District in future fire services discussions.”

Both the City and County agree about the main points of negotiation:

“It’s important for us to look forward and not behind us,” said Reno Mayor Hillary Schieve. “This is a new day for Reno. We are all here as one community to work together. What ever happened in the past, happened in the past. This is one of the most important decisions we will make as elected officials because it’s about providing the highest level of public safety to our citizens.”

The County echoed the sentiment.

“I think it’s best for both elected officials from each entity to trust our safety teams and make sure we listen to them so we all do what’s best to make sure our citizens are safe,” said Washoe County Commission Chair Marsha Berkbigler.

An automatic aid agreement will last for two years. Consolidation of fire services, which the City is advocating, is still a topic for future consideration.

The City issued the following statement: “Council unanimously approved to direct staff to continue to prepare and research other bodies of knowledge the entities need to get to comprehensive regional coverage. Today’s meeting also included discussion on regional dispatch protocol. Council unanimously approved to direct staff to bring back a specific plan outlining a timeline and costs that would be incurred in order to have a regionalized dispatch system.”

The next meeting about these topics is August 3, 2015.