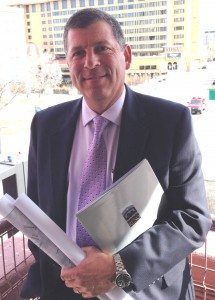 STATEMENT FROM MIKE MAZZAFERRI: Sierra Sage Golf Course is a mere pitch shot from the Truckee Meadows Fire Protection District’s Station 13 on Silver Lake Blvd in the community of Stead. However, because of current political stalemates and budget woes, the first response comes from a City of Reno Fire Station nearly three miles away.

“We serve about 60,000 people each year at The Sage,” said Mike Mazzaferri, operator of the county golf course is a candidate for Reno’s Ward 4 Council Seat. “Without the automatic aid agreements, I feel our citizen-patrons, are at risk. If elected, I wouldn’t let that happen.”

Mazzaferri has approached the Washoe County manager’s office to begin the process of de-annexing the course from the City of Reno and making it a part of the unincorporated county, and the Truckee Meadows Fire Protection District, to assure faster response time.

“It’s dangerously ironic that we have a paramedic team right next door, and they aren’t the first to be called,” Mazzaferri said. “We have a de-filbulator on the course for heart attacks, but when time and training level is of the utmost importance, we are leaving too much risk on the table. The current situation leaves us no choice, really”

Mazzaferri said his first priority if elected to the City Council will be to re-institute all automatic aid agreements and take a serious, politically chaste, look at truly regional services and costs savings. The just released Citizens’ Blue Ribbon Committee on Regional Fire and Emergency Response report, which recommends full automatic aid, may be a good starting point, he said.

“Elected officials, politicians, should not stand in the way of public safety. We need to address, in a transparent way, all of our public safety management and contracts to assure we are getting the best service, best response and best management practices no matter where a political boundary may fall ,” Mazzaferri said. “If there is one thing local government has to do, is to provide and protect public safety. That’s job #1.”

“I have asked the County Manager’s Office to put this issue on the first open agenda they have, as we are getting into our busiest season,” Mazzaferri said.