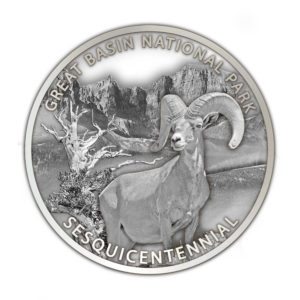 The Nevada 150 Commission announces the final sales of the popular Nevada Sesquicentennial medallions. There are two opportunities for Nevadans to purchase or complete a set of the series of four medallions that have been produced throughout the year.

For those who may have missed purchasing one of the first three medallion designs, an “amnesty” period has been established. Collectors can purchase up to two different designs at a cost of $150 each.

Orders went on sale November 12 and end November 30; however, orders will not be fulfilled until at least March 31, 2015. The fourth medallion will not be available for purchase during the amnesty period.

In addition to individual medallions, the Commission will mint a limited, numbered edition of 150 sets of Sesquicentennial medallions made out of silver from the Coeur Rochester mine in Nev. These special sets will be enclosed in a display case and include a certificate of authenticity.

Sales for the sets of all four medallions began November 12 and are on a first come-first serve basis. All orders must be received by November 30 in order to be available by December 15 in time for the holidays. Sets are limited to two per family at a cost of $600 each. Copper sets are also available for $100 and include a display box. There is no limit to the copper sets.

The medallions have been a popular commemorative item among Sesquicentennial merchandise.

Each one ounce medallion is made of pure Nevada silver from the Coeur Mine in Rochester, Nev. The copper medallions are made with Nevada copper donated by Newmont Mining from its Phoenix mine.

Orders for the Sesquicentennial medallions can be made through the Legislative Gift Shop (LGS) website by visiting www.nevadalegislature.com and clicking on **NEW ITEMS**, or in person at the LGS, 401 South Carson St., Carson City.

Sales of the commemorative medallions helped fund the Nevada 150 events and year-long celebration. For more information about the medallions, visit www.nevada150.org or call 775-687-0608.

Nevada’s Sesquicentennial, the 150th anniversary of Nevada’s admission to the Union, provides opportunities for celebration and reflection as we come together statewide to commemorate our shared history and build a foundation of cultural appreciation for generations to come. Nevada’s one of a kind and diverse history is being celebrated throughout the state for an entire year in order to promote pride in the shared heritage of all Nevadans. Nevada’s Sesquicentennial celebration commenced on Nevada Day 2013 and concludes with an expanded Nevada Day celebration October, 2014. For more information, please visit www.nevada150.org.