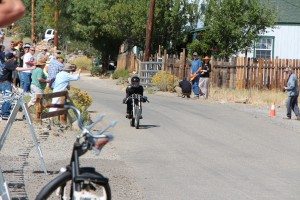 Silver City residents have developed a new group called Silver City Arts. The group meets once a month – the October meeting is on Wednesday, October 1, at 7 p.m. at Doodads Emporium on Main Street at 300 Main Street, in Silver City.

The group developed rapidly after a lively Arts Townhall meeting with the Nevada Arts Council in February of 2014 at the Silver City School House/Community Center.

Since then, the group has built its own art exhibit display stands, helped survey area artists, writers, actors, and photographers for a new Cultural Resource Inventory of the Comstock, and helped local business Doodads Emporium host the first annual Silver City Downhill Derby Race as a fundraiser for Silver City Arts events. The Derby included an “art car” category, and the trophies themselves were works of art, designed by local artists and lapidary Canyon Cassidy.

The group is also planning an October 31 art exhibit celebrating Silver City, past and present, which will be a “Signature Event” for Nevada 150, the year long statewide celebration of Nevada’s Sesquicentennial, the 150th anniversary of Nevada’s admission to the Union. It will be one of hundreds of events to showcase the unique contribution of Nevada’s culture and history that have been taking place over a yearlong celebration that includes official community based and signature Nevada 150 events.

The Silver City fine art and photography exhibition on Friday, October 31, from noon to 4 p.m., will take place at the Silver City School House at 385 High Street. The show will include artwork celebrating Silver City’s fascinating past and present.

Work by well known artists, photographers, and artisans who presently live in Silver City or who lived in the historic community in the past, such as Jean LeGassick, Jeff Nicholson, Karen Kreyeski, Larry Wahrenbrock, Cathy Wahrenbrock, and Jim McCormick, as well as photographers such as Canyon Cassidy and Renate Victor and stained glass artists Wayne Thomas, will be on display.

Rare historical photos showing the town’s rich history will also be included in the exhibit. In addition, the town boasts a number of writers, and both fiction and nonfiction publications by local authors will be on display.