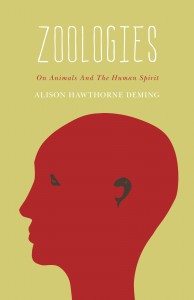 Award-winning author and poet Alison Hawthorne Deming reads from ZOOLOGIES: On Animals and the Human Spirit (Milkweed Editions, 2014), her latest book of artful and incisive essays, on Thursday, October 9, 6:30 p.m. at Sundance Books and Music, 121 California Avenue, in Reno.

Since the dawn of civilization, animals have served as our adversaries and our companions, our helpers and our gods. Today, the inexorable rise of our own species has been accompanied by the large-scale extinction of others.

Ranging from the Serengeti to Madrid to her own backyard, Alison Hawthorne Deming helps us see the creatures around us with fresh eyes. Along her journey, Deming uncovers what hyenas can tell us about human bloodlust, how the art of leaf-cutter ants complicates our own artistic endeavors, what elephants can teach us about the deep reverberations of war and peace in our communities, and more.

Moving beyond the grief and anxiety that so often surrounds any consideration of species extinction, these artful and incisive essays illuminate the mystery and wonder of our shared earthly experience.

Alison Hawthorne Deming is the author of four collections of poetry and four works of nonfiction. Science and Other Poems, her first book, was selected by Gerald Stern for the Walt Whitman Award, and her collection of prose, The Edges of the Civilized World, was a finalist for the PEN Center West Award.

Her writing has appeared in numerous magazines and anthologies, including Orion and Best American Science and Nature Writing. A former Stegner Fellow and the recipient of numerous NEA fellowships, Deming is a Professor of Creative Writing at the University of Arizona. She divides her time between Tucson and Grand Manan, New Brunswick.

You can find out more at http://www.sundancebookstore.com/Deming.

This event is made possible through a partnership with the Center for Art + Environment at the Nevada Museum of Art, Nevada Humanities, and with support from the Nightingale Family Foundation.