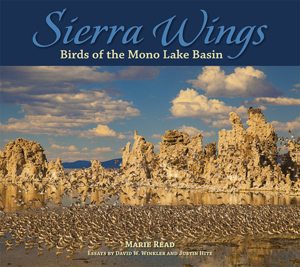 Join Marie as she follows Mono Basin’s birds in the wild through her camera lens, revealing their behaviors and fascinating lives in this spectacular birding hotspot in California’s Eastern Sierra.

Marie will also show her photographic equipment and describe how she obtained some of the behavior and action shots in the book. Signed copies of her book will be available for purchase.

Mono Lake, one of the most important lakes for wildlife in North America, offers a vast food resource for breeding gulls and other birds in summer and an essential refueling stop for countless migrating shorebirds and grebes in autumn.

David W. Winkler, ornithologist and cofounder of the Mono Lake Committee, invites us in his Introduction to Read’s Sierra Wings: Birds of the Mono Lake Basin to come wander this magical land. Located in California’s spectacular Eastern Sierra, Mono Lake is an oasis in the dry Great Basin and a vital stop on the Pacific Flyway providing habitat for millions of migratory and nesting birds.

Because large numbers of phalaropes, gulls, and grebes depend on the lake, along with approximately 100 species of other birds, Mono Lake was designated as a part of the Western Hemisphere Shorebird Reserve Network (WHSRN).

Marie Reed’s images and articles have appeared in magazines such as Living Bird, Bird Watching, Nature’s Best, Birds & Blooms, and National Wildlife, as well as in books, calendars, and websites.

This event is made possible through a partnership Nevada Humanities and with support from the Nightingale Family Foundation.