Home > News > Agriculture > Curious What Lies Beneath? So Are We!
AgricultureEducationFeaturedGovernmentNews

Curious What Lies Beneath? So Are We! 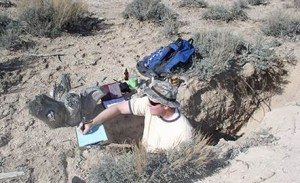 Reno, Nev.— The U.S. Department of Agriculture’s Natural Resources Conservation Service (NRCS) has finished unearthing what kinds of soil lie beneath the surface of a portion of central and central eastern Nevada and has made the findings available to the public, who can use it for a variety of planning reasons.  Titled:  Humboldt National Forest, Nevada, South Part, parts of Lincoln, Nye and White Pine Counties (NV778), the soil survey has been published on NRCS’s online tool, called Web Soil Survey, at: http://websoilsurvey.sc.egov.usda.gov/App/HomePage.htm.

The survey covers 1,062,220 acres and includes three Major Land Resource Areas (MLRA), which are physiographic boundaries based on geology, groupings of major plant communities and climate conditions.  The survey provides soils and associated ecological site information for the Mount Moriah area, Schell Creek Range, Ward Mountain area, White Pine Range, and Grant Range of White Pine County and Quinn Range of Lincoln and Nye counties, Nevada.  Soil mapping for this survey was performed at a 1:24,000 scale (order 3) which is meant to be used at the landscape scale, commonly used by land managers.

The survey is a cooperative effort between the U.S. Forest Service and USDA-NRCS, National Cooperative Soil Survey.  Eight soil scientists and three range specialists collected data for this soil survey beginning in 2006 and finishing in the fall of 2013.  Edits, calculations and validations for quality assurance were completed last winter with uploading to the Web Soil Survey concluding this month.

The survey was produced using soil–ecological site correlations, meaning that soil profiles were described to identify soil characteristics that regularly support vegetative communities.  Once this relationship is established, the expression of vegetation on the landscape is used to map soils with confidence.  At regular intervals, soil profiles are described to confirm established soil–ecological site relationships on the landscape.  Soil profile descriptions include: soil color, soil texture, soil structure, concentrations of clay or salts such as calcium carbonate or sodium, and soil depth to a restrictive layer such as bedrock, a petrocalcic layer (commonly called caliche) or a duripan.

Why Are Soil Surveys Important, and To Whom?
Soils information, along with vegetation information, can be used to understand the types of crops that can be grown by farmers and ranchers, what seed should be used to re-vegetate the landscape post-fire and how to better manage the landscape for range, wildlife or wilderness use.  The survey provides a key tool to land managing agencies to help them make more scientifically sound decisions when it comes to rangeland, forestland and wildlife management.

Soil surveys also provide valuable information for private land owners by providing general soil depth, rock and clay content of soil that is useful for gardening, constructing a home or placing a septic system on their property.  The soil survey provides information on soil characteristics that can be used to determine soil erodibility, soil infiltration rates, potential vegetation, soil depth and many other interpretations that can be queried on Web Soil Survey.

How is the Soil Survey Made?
After analyzing aerial images of the survey location for similarities in elevation, geology, landform, aspect, slope and vegetation, scientists go in the field to collect soil profile information in representative areas by digging holes to take a look at the soil.  Scientists can spend a week or several weeks at a time traversing the wide open desert of Nevada—sometimes at very high altitudes—during the field season (generally May-October), digging holes up to five feet deep to either confirm what they thought was beneath the surface or discover it may be something unique.  Soil profile and vegetation information is then analyzed to develop the soil survey.

“I look at the soil layers to identify horizons based on color, texture, structure and rock fragments.  Then I see if there are accumulations of things, such as calcium carbonate, salt or clays,” said Brien Park, NRCS soil scientist, who worked on the soil survey. “After I get my hands dirty, the next step is to use computers to correlate notes and information.”