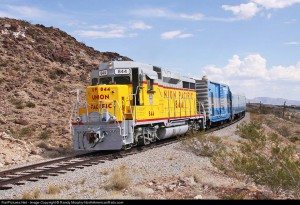 Governor Brian Sandoval and Lieutenant Governor Brian Krolicki are on-board the expedition along with members of the NV 150 Commission, Union Pacific representatives and sponsors.

All festivities throughout the trip aim to create a sense of statehood camaraderie and encourage communities to be proud of their town’s legacy and contributions over the last 150 years.

The public is invited to greet the train at each stop. Dates and times are tentative and subject to change.

Sesquicentennial commemorative belt buckles may be available for purchase at some stops. The public is encouraged to follow the journey on Facebook and Twitter using the hashtags #NV150 and #BattleBornExpress.

Nevada’s Sesquicentennial, the 150th anniversary of Nevada’s admission to the Union, will provide opportunities for celebration and reflection as we come together statewide to commemorate our shared history and build a foundation of cultural appreciation for generations to come. Nevada’s one of a kind and diverse history will be celebrated throughout the state for an entire year in order to promote pride in the shared heritage of all Nevadans. Nevada’s Sesquicentennial celebration commenced on Nevada Day 2013 and concludes with an expanded Nevada Day celebration October, 2014. For more information, please visit www.nevada150.org.