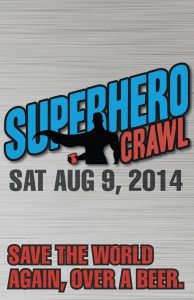 After hearing about the cancellation of the national running event 5K Foam Fest, organizers of the local Arch Rivals Superhero Run being held August 9, 2014, have decided to offer free registration to anyone who signed up and paid for the cancelled Foam Fest run.

“We feel horrible about all the people who paid to run that race and got left hanging,” said Ed Adkins, owner of Let’s Do Things, the company organizing the Arch Rivals Superhero Run.

Adkins’ company, who also is organizing the Reno Superhero Crawl on August 9, and the Steampunk Tavern Stroll this Saturday, July 19, puts on costumed crawls and running events based in the Reno area.

Anyone who signed up and paid for registration to the canceled 5K foam fest just needs to fill out a form at www.letsdothings.com/5k-foam-fest-fix/ by 5 pm, Monday July 21 to receive a code to register for the local Arch Rivals Superhero Run free of charge.

The 2nd Annual Arch Rivals Superhero Run is a costumed fun run for all ages put on morning of the Superhero Crawl, the longest running Superhero bar crawl in the world held in Downtown Reno, NV, which has quickly become the Crawl Capital. More information on these events and the “5K Foam Fest” can be found at www.letsdothings.com.