Mount Rose is the highest peak in the immediate vicinity of Reno. It stands over Reno somewhat unnoticed most of the time and is often confused with Slide Mountain. Slide Mountain contains the Mt. Rose Ski Resort with its very visible slopes standing out no matter the time of year. Hiking Mount Rose is something a bunch of people from around here have done. It’s a nice day trip without a major amount of climbing and has some tremendous views throughout the trek.

I’ve wanted to get out and climb Mount Rose for a few years. Knowing the round trip was about 10 miles made it seem like something that was possible, even if you moved at a slow pace. It would also signify a decent accomplishment. In my case, it’s the first real ascent I’ve made and the highest elevation I’ve reached outside of an airplane.

The plan was to leave our house around 9:00 on Saturday morning. That would put us at the base of the trail around 9:30 or so. I expected the hike to take about three hours up and two back—somewhere in that range. We actually got to the base at 9:00 and got rolling pretty much right away. The entire trip wound up taking about 6:30, which was obviously slower than anticipated. This was due to a lot more snow than I expected.

We each carried a day pack. Christy’s contained her water sleeve filled with two liters, a bottle with another liter and her jacket. I also carried a two-liter sleeve along with a 1.5 liter bottle, a first aid kit and our food. We brought some Tahoe Trail Bars, dried mangoes, cashews, salami, those little wax wheels of cheese, Reese’s Pieces, and some fruit roll-ups. The salami, mangoes and cashews were super clutch. I also brought along some wind/water resistant pants and a jacket. I was not worried about keeping it light—this was in some ways a little test for me. I didn’t, however, weigh the pack so I have no idea what I had to lug. It was definitely not ten pounds, though. 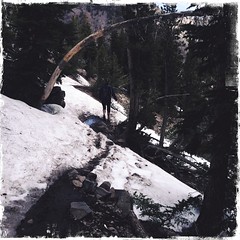 Through Some Snow: The snow was deeper and more frequent than I expected on the trail. Photo by Ryan Jerz.

The climb starts with an immediate uphill for a couple hundred feet of elevation gain. It lasts about .5 to .75 miles, then starts to level off and even decline. At about a mile and a half, you begin to descend, the whole time through the trees, into a meadow. that last mile or more to the 2.5 mile point was on a northeast facing part of the trail, which meant that the snap was present. In more than one spot, the trail was invisible or covered, but luckily it was either made up with a lot of footprints throughout he snow or easily found just a few yards away from where we had to go to get around it all.

In a few of the spots, the snow was not only deep and beginning to soften with the heat of the day increasing, but it was also on a steep slope of the hill, so it was a bit sketchy. We were holding onto trees or simply hoping feet didn’t slip and slide us down the hill a few feet. Probably more than any danger, we were worried about sliding down then having to get back up to the trail. That would have sucked.

At about two miles we ran into a couple of hiking groups. We knew there was a waterfall on the trail and that it was about halfway along. At this point we could also hear it. We asked knew of the groups—this group was on its way back—whether they had made the entire trip up. They told us that they had only gone as far as seeing the waterfall because the trail basically disappeared in the snow. At this point we contemplated checking out the waterfall then turning back. That’s when we talked with the other group. It was three guys and they were heading the same direction as us. We stood overlooking the meadow and I asked them if they know where the trail was supposed to be. One of them pointed across the meadow and said the trail ran right along the trees. I could make it out as it climbed upward and it was soaked in glorious sun. We decided to try to get to it and move on. 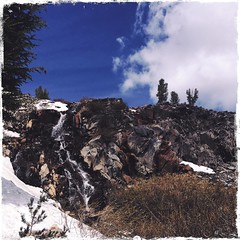 Waterfall on the Mt. Rose Trail: About halfway into the hike to the top, you reach this waterfall. It’s the destination for many of the hikers. Photo by Ryan Jerz.

The waterfall is pretty awesome. Getting there wasn’t. It was pretty snowy that last quarter mile or so. Along the side of a relatively steep hill, we trudged. At one point, it appeared that everyone who had come before us just made their own trail because it was entirely covered. That meant about a ten foot drop on a steep angle that would have to be taken in big steps to reach each foot plant. It wasn’t easy. We got a little wet in this process, but eventually powered through as a big group and came upon the fall. That’s where we rested for a few minutes and ate up the high protein snacks. I could tell by my watch’s altimeter that we were going to pay for the level first half of the trek with a nice bit of climbing in the second.

Almost immediately after leaving the waterfall, you climb. It’s not a hugely difficult climb, but it’s a legitimate one. You wind along the edge of a hill until you’re making your way up a watershed, then cross over onto the low end of Mount Rose itself. The are some trees giving you cover from the sun, and the only time we saw snow was on one side of the watershed area here. After about a mile and a quarter, you reach a clearing with a Mt. Rose Wilderness Area sign. There are a couple of trails converging here, and the indicator reads that the summit is about a mile away. It’s more like a mile and a half at this point, but I guess you can’t blame them for keeping you motivated.

Immediately, the climb begins again. This time it was snowier, but not too bad at first. Most of it appears to be large drifts that just hadn’t melted off yet as opposed to unexposed snow that stayed deep. Not long after we hit the 10,000 foot mark in elevation. Shortly after that began an area with a few switchbacks. We saw a woman on her way down with a dog. We asked how it was and she told us that it was great—the dog loved the snow. Awesome. 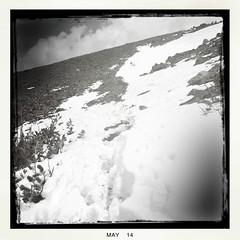 The Final Push: This is the last few hundred yards to the top of Mt. Rose. The snow is about a foot deep on the trail. You can see other hikers on their way up in the top right of the frame. We shot this on our way down. Photo by Ryan Jerz.

After the few switchbacks you wrap around the north end of the mountain for the final push. At this elevation and facing north, there isn’t much hope for the trail being clear. It was snow for about the last 500 feet of climbing. We saw a few more guys on their way down around here. They said the summit was nice. The climb wasn’t as nice. The wind was blowing pretty good and we had to put jackets on.

A few hundred yards from the top, there are a couple of switchbacks again. Pushing through them at that point hurt a little, but once we reached the summit it was pretty clear why people did this. The views are pretty spectacular. The ability to look at both Lake Tahoe to the west and Reno to the northeast is pretty great. Reno looks impossibly far away considering how close Mount Rose looks from the city. It was far enough away, for instance, that I couldn’t tell if a single plane took off from the airport in our time up there. That surprised me since I expected to see them close to level with us on the horizon.

Lake Tahoe was its usual, amazing self:

Lake Tahoe from the top of Mt. Rose Photo by Ryan Jerz.

We hung around for about 20 minutes up top and saw a few other people. I took a picture of a pair of women who held up an American flag with the lake in the background. Another guy appeared to come up the Church’s Pond route and make his way along the ridge before heading back down.

The trip back down, while faster, was still hindered by the snow. We saw our three friends from the waterfall just as we began the descent and a few other people along the way. For some of them, the time was getting to be a little late to be able to make it up and enjoy the view before having to scurry back down. After the waterfall, where we took another short break, the snow and our tired legs had some fun with us. We both began to hurt a little and just felt like getting back. I imagine that’s what it’s like on any climb. Getting down is just tedious. A lot of people were hanging out at the waterfall when we reached, so there were quite a few others on the remaining trail back.

Here are some of the stats, with an elevation profile first: