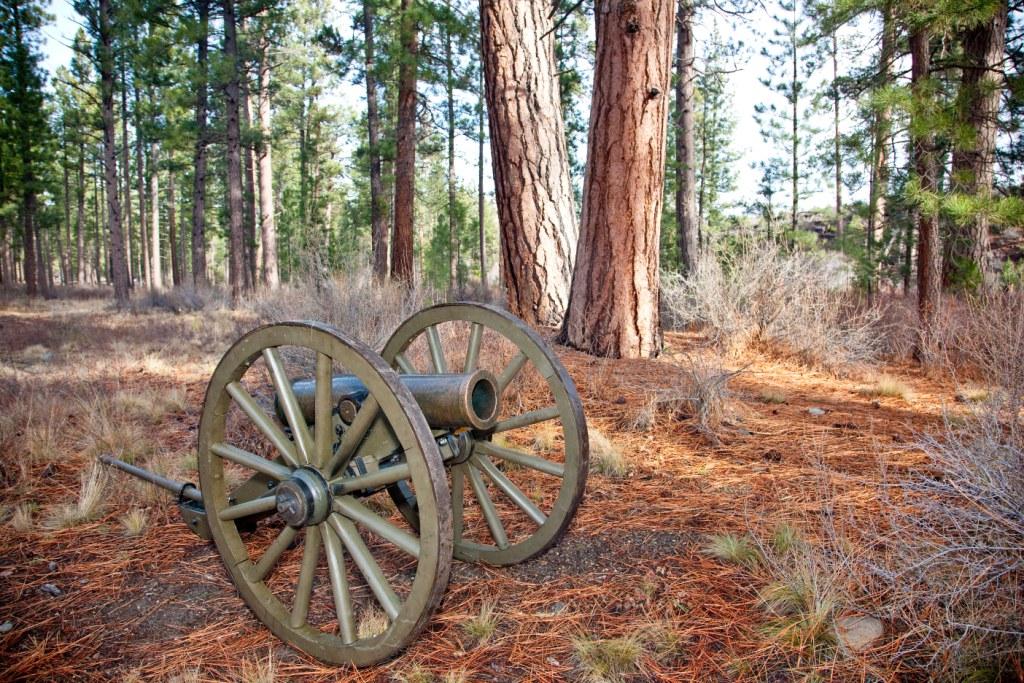 The Nevada State Museum in Carson City offers a peek at what is believed to be the Fremont Cannon, left in the state by explorer John Fremont.

Admission to the Nevada State Museum in Carson City will be free Oct. 25 and 26, as the custom in the state capital is to enjoy the museum and its store during the parade, held each year on the Saturday following the official state holiday on Friday. This year marks the 75th anniversary of the Nevada Day parade.

In Carson City, the museum will start festivities on Oct. 25 with the first minting of the Nevada sesquicentennial medallions, sold through the NV150 Commission at the Legislature’s gift shop. On Oct. 26, the historical and collectible Nevada Day medallions, both in silver and brass, will be minted and sold at the museum. Minting will take place from 10:30 a.m. to noon and from 1 to 3 p.m. both days. Visitors also are welcome to see a new exhibit that includes a rare peek at what is thought to be the Fremont Cannon, left behind by the explorer who named the state.

Also new in Carson City for Nevada Day is “Our Nevada Stories: Objects Found in Time,” where visitors can learn about the state symbols and minerals and see a detailed model of the Nevada Capitol. The display shows a commemorative quilt, the first known specimen of the North American Ice Age cheetah, original American Indian art and artifacts of historic value to Nevada. Museum hours are from 8:30 a.m. to 4:30 p.m. Oct. 25 and 26.

New at the state’s railroad museum in the capital is a rare black-and-white photography collection displayed against the authentic background of the historical depot. Ely photographer Joel Jensen’s collection of photos showing railroad operations across the country are a must-see on Oct. 25 and 26. Jensen will offer an artist talk at 4:30 p.m. Oct. 26 in the depot as the last train trip ends. The museum’s historical McKeen Motor Car will operate from 10 a.m. to 4 p.m. Oct. 26. Train rides cost $8, $4 children ages 4-11, free for those ages 3 and younger. Exhibits in the Jacobsen Interpretive Center tell the story of the railroad’s contribution to the creation of communities and industries that built Nevada.

The Nevada Historical Society will be closed Oct. 25 and 26 due to homecoming events at the University of Nevada, Reno.

The Nevada State Museum, Las Vegas invites guests to enjoy conversations with real characters who bring history to life. Visitors will meet a miner and climb in his footsteps, a trapper who hunts for survival and a pioneer who sings to entertain her community. The museum’s curators will perform their respective work in the public area so visitors can see what they do, how they do it and ask questions. On Oct. 26, finalists in the Name the Sloth contest will tour the museum, and the contest winner will be announced. Museum hours are from 10 a.m. to 6 p.m.

In Overton, at the Lost City Museum, visitors are invited to explore the sesquicentennial exhibit “Nevada Milestones.” Featured will be panels, photographs and artifacts on Nevada history including gaming, mining, state symbols, notable women and a collection of photographs of Southern Paiutes taken by John K. Hillers between 1871 and 1873. Museum hours are from 8:30 a.m. to 4:30 p.m.

In Boulder City, the Nevada State Railroad Museum celebrates Nevada Day with the Halloween Express train Oct. 26 and 27. The train is decorated in a family-friendly style and visitors are encouraged to come in costume. Children in costumes ride the train for free. New for 2013, the train will feature story time and crafts in the dining car and free face painting and balloon creations on the platform. A model train show and rides on the mini-steam engines also are available thanks to the friends of the museum. Train rides take place at 10 and 11:30 a.m., 1 and 2:30 p.m. Cost is $10 for those ages 12 and older, $5 children ages 4-11 not in costume, free for those ages 3 and younger. Museum hours are from 9:30 a.m. to 3:30 p.m.

In East Ely, visitors are invited to tour the East Ely Railroad Depot Museum, which focuses on the historical industrial development of Nevada as evidenced by the massive copper production that began in the area in 1900. Located in the historical Nevada Northern Railroad Depot building, the museum interprets mining and transportation heritage, and is open from 8 a.m. to 4:30 p.m.

Gov. Brian Sandoval has proclaimed October as Nevada History Month and urges Nevada residents and tourists to learn more about the state’s history during the celebration.

History for the Holidays local art and book sale set...