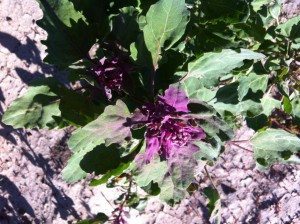 A high nutrition crop called quinoa shows promise for surviving the low-water and high winds of Northern Nevada. The hope is that quinoa, a gluten-free, high protein grain, could be a profitable crop for small-scale farmers that could also help strengthen the local food system. Healthy Communities Coalition of Lyon and Storey, a regional nonprofit, envisions a day when the region will have quinoa and gluten -free grain processing capabilities, and has been assisting local farmers in finding spots to test out the viability of quinoa and other specialty crops.

For instance, early in the growing season this summer, farmers from Dirt Merchant Farms of Stagecoach, Nevada cultivated test plots of amaranth, qunioa, and its “cousin crop”, lambs quarters, at the Dayton community garden on River Road. They also put in some quinoa test plants at the Silver Stage Community Garden near the local schools in Silver Springs. Next spring, they plan to try cultivating quinoa in Hawthorne, Fallon, Stagecoach, and Yerington too.

Jesse Alexander of Dirt Merchant Farms described the results of the quinoa test plots, saying, “all in all I would call the Dayton patch successful. I can recommend it for large crop rotation here in spring and fall and in southern Nevada during the winter months.

The water requirement is equal to any other garden plant – it will survive in low water scenarios, but prefers to have regular watering. The only pest we had were the cabbage moths (white butterflies that are seen often in the garden).Specialized heirloom varieties will be tested next year and the seed kept for expanding the best varieties.

Also, we will be testing another quinoa “cousin crop” called Huauzontle or Aztec Broccoli this fall in Stagecoach, Nevada.”

Quinoa has become more and more popular in recent years because it is a gluten-free, cholesterol-free grain with high iron, protein and fiber. One cup of cooked quinoa contains more than 8 grams of protein and about 15% of the recommended daily intake of iron. Due to its nutrient value, the Food and Agricultural Organization of the United Nations has officially declared 2013 “The International Year of the Quinoa.”

Where Can You Buy Quinoa Locally?

HCC is a regional nonprofit coalition composed of diverse local, state, federal and tribal groups and community volunteers working together to improve the quality of life in the Lyon, Storey and Mineral regions. For more information, call director Christy McGill at 246-7550.