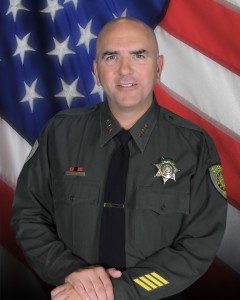 Tim Kuzanek, a 20-year veteran of the Washoe County Sheriff’s Office, was promoted to the position of undersheriff this week. The undersheriff is second-in-command to the sheriff and responsible for the managerial oversight of all Sheriff’s Office operations and fiscal management.

Kuzanek was serving as assistant sheriff of the Administration Bureau until he was promoted to his new role by Sheriff Michael Haley on Monday.

“I’ve known Tim for a long, long time,” Haley said. “He is a critical thinker and a hard worker. He believes firmly in the Sheriff’s Office team and has the leadership skills necessary to keep that team on the right track.”

Kuzanek said he looks forward to putting his years of experience to work for the benefit of the Sheriff’s Office and the communities it serves.

“We’ve done such great work over the years and it is going to be my honor to help lead this organization as we create even more successes in the future,” Kuzanek said.

Kuzanek began service with the Washoe County Sheriff’s Office as a detention deputy in 1993. Since then, he has gained line and command experience in all three of the Office’s bureaus: Detention, Operations and Administration. As assistant sheriff of the Administration Bureau he was responsible for the Sheriff’s Forensic Science Division, Administrative Services, Regional Public Safety Training Center, Training Division, Research & Development, Backgrounds, Community Relations, Regional Animal Services and Dispatch.

Kuzanek has also served as the director of the Northern Nevada Counter Terrorism Center and as the Washoe County Sheriff’s Office governmental affairs representative. Additional assignments have included the Special Weapons and Tactics Team, Narcotics and Hostage Team.

On Monday, Haley appointed Anthony Miranda as the new assistant sheriff of the Administration Bureau.