Gov. Mitt Romney fired up a crowd of about 2,000 enthusiastic Northern Nevada  voters today, urging them to get to the polls and help him take the battleground state that is Nevada 13 days from now.

Romney told the crowd that President Obama is out of ideas, out of excuses and will be out of office come Nov. 6.

The president, “doesn’t understand what it takes to get this economy going, he doesn’t have a plan to get jobs for Americans, I do and that’s why I’m going to win,” he said. 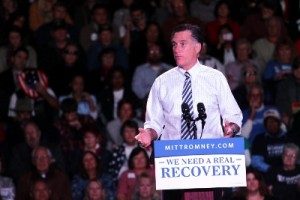 He promised to repeal and replace the federal Affordable Care Act, which he referred to as Obamacare, and stop the raid of Medicare funds to pay for it.

Romney said that if Obama is reelected, the national debt will grow from $16 trillion to $20 trillion by the end of his second term.

“I will get America to finally be on track to a balanced budget,” he said.

In his second Nevada visit in as many days, Romney held the rally at the Reno Events Center downtown in a county viewed by many political observers as holding the key to a GOP victory on Nov. 6. He spoke for about 20 minutes.

In a display of just how critical both parties view the state with its six electoral votes, Obama is scheduled to make yet another Nevada appearance later today in Las Vegas.

Nevada voter registration leans Democratic, with 41.9 percent active registered voters to 34.7 percent for Republicans, with another 17.4 percent nonpartisans. Early voting, which began Saturday and runs through Nov. 2, has also favored Democrats so far, with 81,694 votes cast by Democrats through Oct. 23 compared to 62,031 cast by Republicans and 28,981 cast by nonpartisans.

In his remarks, Romney said the election isn’t just about big national issues, but about America’s families and whether they will be able to find jobs and have the ability to choose the school their children attend.

“And I understand what it’s going to take to get this country strong again and provide the answers that your families need,” he said. “Because this is an election about two very different pathways for America. The one represented by the president is in fact one with $20 trillion in debt. He started with $10 trillion, he’s up to $16 (trillion) on his way to $20 (trillion). I’ll balance the budget instead.”

Romney asked the crowd to each find a voter who supported Obama in 2008 and get them to vote for his campaign in 2012 and help “take America in a new direction.”