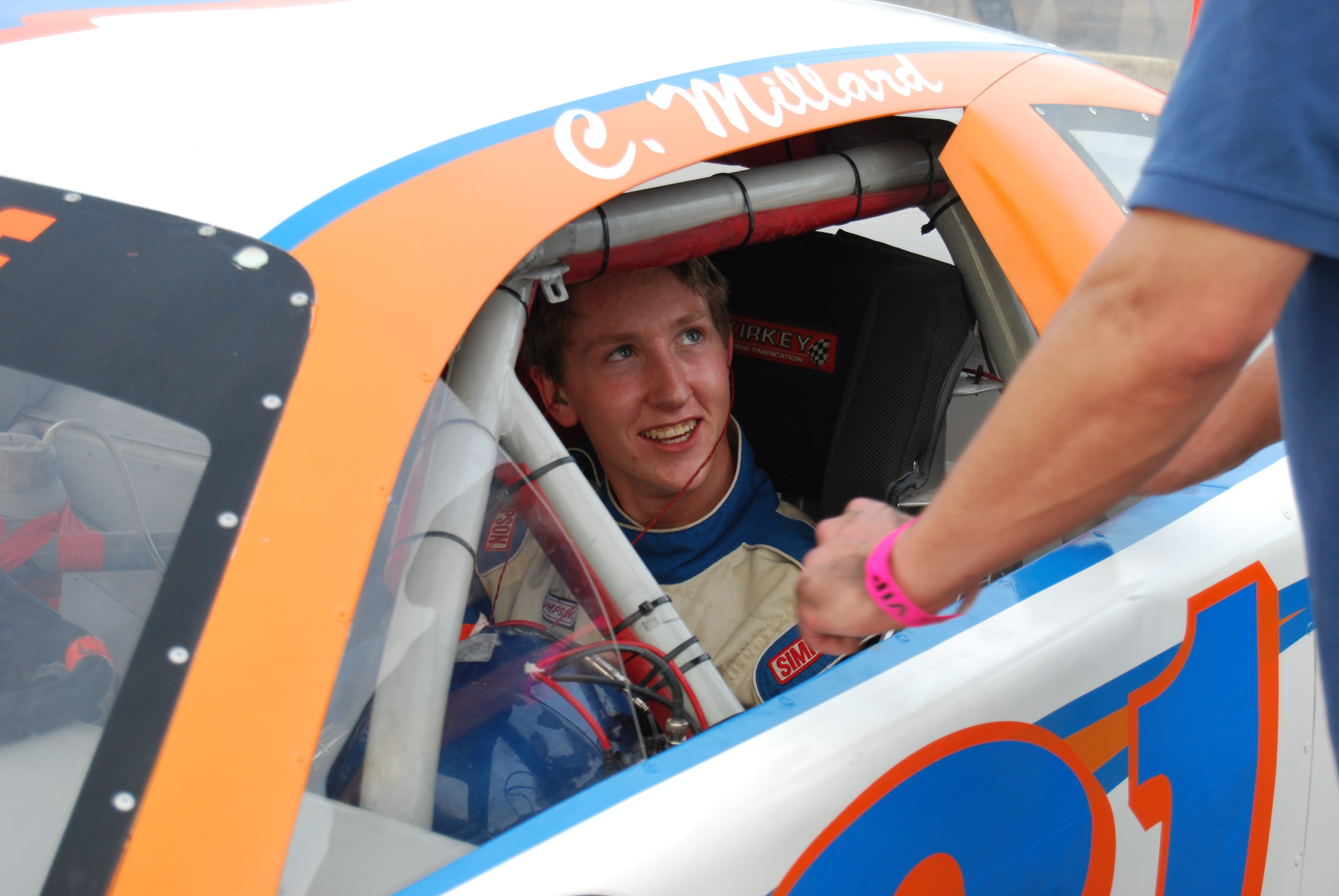 ROSEVILLE–Cameron Millard was already an accomplished racer at age 16, graduating to Late Models at All American Speedway’s NASCAR All American Series after having started with dirt track go-karting at age nine. As an 18-year-old, the Carson City native, driver of the No. 21 NASCAR Late Model, is one dedicated high school student. With nine years of racing on his resume, Cameron decided to learn how to build a new race car from the bare frame for his Carson High School senior project.

Cameron started racing in Outlaw dirt karts at Thunderbowl Speedway, a fifth-mile dirt oval. This is where he spent most of his time learning the fundamentals of racing. Cameron has captured multiple wins and fast times and gained a lot of experience racing his Outlaw kart.

With all the success Cameron had in Outlaw karts, the next step was to move up to the INEX Dirt Legend cars. Millard Racing took on the challenges of the touring INEX Legends series throughout Nevada and California. Within the first ten races Cameron had already picked up the drastic changes and was in the top five every race. By racing the Legend series Cameron learned patience, perseverance and the functionality of car setup.

After Cameron had spent time in the Legend series, Millard racing decided to jump into a full size enclosed late model. This is when Cameron made the adjustment to asphalt from dirt. Cameron drove his perimeter chassis Chevy Monte Carlo Late Model at Altamont before it closed, in the Future Champions Development class for drivers between the ages of 14 and 16 years old.

Cameron is a senior at Carson High School preparing to graduate by presenting an astounding project. A senior project is an academic presentation, usually in the senior year of high school. Students choose a topic of interest to them and create a senior project that consists of the four Ps: paper, project, portfolio and presentation. The student must create a physical product guided by a mentor and write a research paper on a related topic. Then the student has to present his or her project to a panel of judges.

Cameron chose to build a new Late Model from bare frame. Here Cameron learned the technicality of how cars work. As a part of his presentation the car was stationed at the high school on display for fellow students. This also was to educate students about racing and why racing is a fun sport. Cameron has successfully presented his senior project, mastering his new Late Model, and is set to graduate this Saturday.

“I had a blast building my new Late Model, and I learned a lot about how race cars work,” says Cameron.

Proud father Michael Millard says, “It was great watching my son be so excited to build his new Late Model, and we can’t wait for it to hit the track at All American Speedway.”

Fans take the track this Saturday at All American Speedway

The one race fans don’t want to miss at All...

Legends, super modifieds, vintage hardtops to be at All American...