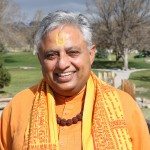 Reno-based Hindu statesman Rajan Zed will partake in the “Religious Leadership in an Interfaith World” seminar of the prestigious Hartford Seminary in Connecticut June 6-10.

About 30 religious leaders from all over USA, including one from Switzerland, will be attending this seminar. They include Christian (various denominations), Muslim, Buddhist, Jewish and more. This maiden seminar of the seminary will reportedly become its annual feature.

Well-known ethicist Dr. Lucinda Allen Mosher will coordinate this seminar. Other speakers include Dr. David A. Roozen, director of Hartford Institute for Religion Research; Dr. Timur R. Yuskaev, director of Islamic Chaplaincy Program of Duncan Black Macdonald Center for the Study of Islam and Christian-Muslim Relations, and Dr. Yehezkel Landau, director of the Building Abrahamic Partnerships. It will reportedly include field trips.

“In a diverse religious culture, effective religious leadership must include awareness and engagement with faith traditions other than one’s own,” the seminar announcement says.

Zed, who is president of Universal Society of Hinduism, stresses that all religions should work together for a just and peaceful world. Dialogue would bring us mutual enrichment, he adds.

Hartford Seminary, whose tagline is “Exploring Differences, Deepening Faith” and whose traces go back to 1833, claims to be “an educational institution where a consciousness of God is cultivated and shared.” “Hartford Seminary’s influence reaches far beyond the walls of churches, mosques and synagogues. Its work strengthens the moral character of society,” it adds. Dr. Heidi Hadsell is president, while Dr. Efrain Agosto is the dean.

Zed, who lives in Reno, is a Hindu religious leader who has taken up interfaith, religion, environment, Roma and other causes all over the world. He has read opening prayers in the U.S. Senate, various state senates and houses of representatives/assemblies, counties and city councils all over the country and was invited by the president of the European Parliament in Brussels for a meeting to promote interfaith dialogue. Bestowed with the “World Interfaith Leader Award,” Zed is a panelist for “On Faith,” an interactive conversation on religion produced by The Washington Post, senior fellow and religious advisor to the New York-headquartered Foundation for Interreligious Diplomacy, director of interfaith relations of the Nevada Clergy Association, spiritual advisor to the National Association of Interchurch and Interfaith Families and more.