A little-known provision in PPACA created the Early Retiree Reinsurance Program to subsidize employer-sponsored health benefit programs for early retirees. Nationally, about three-fifths of such plans serve local-government employees or are union-run or union-negotiated.

In Nevada, all 21 programs on the federally supplied list meet that description:

A temporary reinsurance program that was scheduled to run through 2014, ERRP in its first few months gave out more than $1.5 million to underwrite sponsored retiree-insurance programs in Nevada. According to a White House press release, applicants approved into the program receive reinsurance for the claims of high-cost retirees and their families (80 percent of the costs from $15,000 to $90,000).

Essentially, ERRP shifts the cost of benefits for government and other union employees onto federal taxpayers.

Nationally, the reinsurance fund had $5 billion to spend to “maintain” health coverage for employees 55 and older who aren’t yet eligible for Medicare but want to retire anyway. Now, however, congressional investigators say the program could be out of money by the end of the year.

Richard Popper, director of the Office of Insurance Programs at the federal Center for Consumer Information and Insurance Oversight, first estimated that the program’s funding would run out by 2012 — just two years after its startup. However, a recent House Energy and Commerce Committee internal memorandum says that at the current rate of spending, “… the program will quickly spend all available funding as early as this year.” According to the memo, ERRP last year paid more than $535 million to 253 approved sponsors.

As of March 2011, ERRP approved 5,452 employer plans, and nearly 60 percent of them serve government organizations or unions. Government and union plans received $311 million of the $535 million.

The House committee held hearings in early April regarding ERRP but was unsatisfied with the testimony. In an April 21, 2011, letter to Steve Larsen, director of The Centers for Medicare and Medical Services, the committee demanded “continuing information” regarding ERRP.

“We are deeply troubled that this program has apparently served as a vehicle to simply hand out taxpayer funds to various corporations and unions that lined up at the trough,” the committee wrote. “It does not appear that HHS instituted any meaningful controls on this program, leading to an incredible waste of taxpayer money.”

The committee also questioned why Larsen and the centers were “pleasantly surprised” at ERRP’s response rate. “Amazingly, CMS seems to be pleasantly surprised that there was an overwhelming demand for free taxpayer money by unions and corporations.”

The letter concluded by questioning the lack of “administrative requirements” for distribution of the ERRP funds, which would have prevented the “wholesale waste of billions of dollars of taxpayer funds.

“Specifically, why has your office not required any finding that the sponsor will not have sufficient funding to provide health care coverage for early retirees without ERRP funding? This simple requirement would have blocked your office from doling out $5 billion of taxpayer money to entities that did not need it — wealthy corporations, liberal media companies and unions with deep pockets.”

According to a committee spokeswoman, the committee requested a response from Larsen within two weeks before it continues with its investigation.

The California Public Employee Retirement System received the single biggest supplement at $57.8 million, while 11 other state governments received between $718,000 and $38 million in funds. According to ERRP’s 2010 report, 205 plans account for 97 percent of the program’s total distributions.

The ERRP program will also cost an additional $39.8 million annually just in bookkeeping and fund-reporting costs, according to the Department of Health and Human Services Federal Register filing. 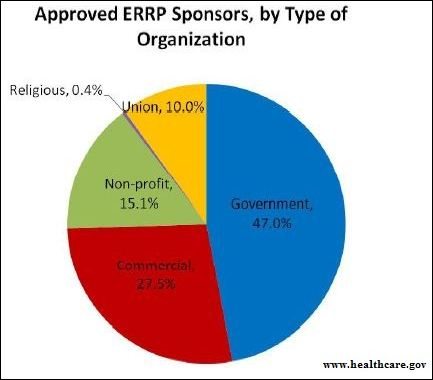 “Neither the ERRP nor the PPACA was intended as a de facto bailout for state and local governments,” the committee wrote.

The committee found that “Fortune 500 companies and Hollywood unions” were among the approved organizations and concluded ERRP is “an inefficient and inappropriate use of funding.”

“Subsidizing these groups may not be the most efficient or appropriate use of taxpayer money, especially considering that the ERRP was given the same amount of funding as the high-risk pool program for individuals with pre-existing conditions,” the committee wrote.

Additionally, the committee noted that “funds the ERRP will not spend on government entities will go to companies that do not appear to need the financial assistance of the federal government.”

Senate Majority Leader Harry Reid, D-Nev., was one of the Senate’s biggest champions of Obamacare and praised the bill when Nevada’s ERRP recipients were announced last September.

“Today’s announcement is good news for early retirees in the Silver State and the latest example of how the new health reform law is already working for Nevada,” Reid said in a statement on his website.

The $33,000 was more than double NV Energy’s previous donations to Democrats, and 2010 was the first election cycle it donated more to Democrats than Republicans.

An NV Energy spokesperson said the company “took advantage of a program made available to all companies” and no favoritism took place.

According to Jim Wells, executive officer of Nevada’s Public Employee Benefits Program, ERRP is so underfunded the federal Health and Human Services Department (HHS) will stop accepting applicants on May 6, 2011.

Additionally, The Centers for Medicare and Medical Services confirmed the ERRP application process will be closing in a March 31, 2011 Congressional Memo due to the program’s “overwhelming response.”

Despite funding issues, the Centers for Medicare and Medical Services stated that if “circumstances related to the availability of ERRP funding change,” they’d consider accepting applications again.

“Originally, [ERRP] was supposed to last until January 2014,” said Wells. “I think HHS underestimated the response and didn’t anticipate so many applicants.”

Wells described the application process as “pretty generic” and the eligibility requirements as straightforward. According to Wells, as long as approved employers have a plan in place for covering non-Medicare retirees and cover the first $15,000 of their health care plan, ERRP will reimburse the employer up to 80 percent of costs between $15,000 and $90,000.

“The application process isn’t difficult,” Wells said. “Right now, it’s just a matter of employers getting their application together before the [May 6] deadline.”

Healthcare.gov, the government’s informational website about the Affordable Care Act, stated if the act were repealed, then all 21 Nevada employers would lose their “much needed” ERRP funding.

However, the Energy and Commerce Committee claimed many of the ERRP recipients either don’t need the funds or wouldn’t receive federal funding on a normal basis.

“Among the entities receiving funding are a number of large corporations that do not need the assistance of the federal government, and other entities that would not receive public support for assistance on an individual basis,” the committee wrote.

Nevada is one of 27 states challenging the constitutionality of Obamacare.

Kyle Gillis is an investigative reporter on Nevada Journal, a publication of the Nevada Policy Research Institute. For more information visit http://npri.org/.

Dept. of Corrections Issues Rebuttal to NPRI About Employee Overtime...

Government workers collected overtime pay despite not working a full...