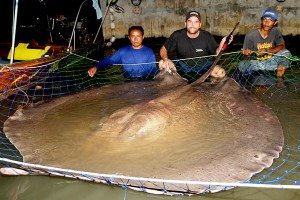 University of Nevada, Reno’s Zeb Hogan with one of the largest freshwater stingrays he’s tagged since 2003. Hogan and his team have tagged 18 of this species of stingrays, Himantura chaophraya, as part of the recently-established research project on the stingray in central Thailand for the University of Nevada, Reno, the Thai Department of Fisheries, the sport-fishing company Fishsiam and the National Geographic Society-sponsored Megafishes Project. This species is listed as vulnerable to extinction by the International Union for Conservation of Nature (IUCN).

Zeb Hogan swims with the fishes and lives to write about it. In the March 2011 issue of National Geographic, the University of Nevada, Reno researcher and assistant professor is pictured swimming with a man-eating catfish and describes swimming underwater with a 400-pound Mekong giant catfish in one of his many adventures in the rivers of a dozen countries around the world.

In the magazine’s “Explorers Journal,” a quarterly section in which the National Geographic Society showcases some of the research its Explorers undertake, Hogan talks about his work as a conservation biologist working to save giant freshwater fish from extinction. National Geographic magazine is circulated in 33 languages to more than 55 million people each month. The March issue starts hitting mailboxes this week.

“Having these fish and the Megafish project featured in the magazine is an important step; it raises awareness about their existence and gets people curious to learn more,” Hogan, a faculty member in the University’s College of Agriculture, Biotechnology and Natural Resources, said. ““There are about two dozen species that qualify as freshwater megafishes in the world, and roughly 70 percent of those are in danger of extinction.

“Finding big fish like the 14-foot freshwater stingray, perhaps the largest ever found, in Thailand last year, is exciting,” he said. “To see them, hold them and swim with them, to know they are still here and we can help protect them – it’s a rewarding experience. It’s a feeling scientists, anglers and wildlife lovers can appreciate.”

Hogan, who hosts the popular “Monster Fishes” television series on the National Geographic Channel, travels the globe to find, study and protect the world’s largest freshwater fish. He searches for these megafish, measuring more than six feet long and weighing at least 200 pounds, throughout six continents and in 14 of the Earth’s most diverse freshwater ecosystems.

Hogan follows such giants to help protect them, but also to unravel fact from myth – like investigating the story of a huge river fish in India that reportedly preys on humans. What Hogan usually finds is that these megafish are not man-eaters, but rather, like other endangered animals, need help to survive.

For instance, biologists estimate that populations of the Mekong’s two largest catfish have dwindled 95 percent in the last century – mostly due to overexploitation and habitat damage. Hogan’s work with the governments of Thailand, Cambodia and Laos has helped establish a conservation program that limits harvesting of the Mekong giant catfish in those countries, increasing the fish’s chance of survival.

As leader of expeditions for the National Geographic’s Megafishes Project, Hogan has worked with nearly 100 scientists in over a dozen countries, visiting rivers like the Amazon, Mississippi, Nile and Yangtze. He has been on expeditions to find and study18 of the 24 known megafish species, including carp, trout, sturgeon and paddlefish, as well the 23-foot-long Australian sawfish, 10-foot-long alligator gar, 14-feet-long endangered giant stingray and, of course, the 600-pound, 10-foot-long Mekong giant catfish.

He’s even journeyed to the headwaters of the remote Rio Roosevelt, a rugged 400-mile-long river in western Brazil that may not have been traveled since Theodore Roosevelt attempted it in 1913. The team navigated Class V rapids in the treacherous river and avoided potentially violent tribesman while working to discover if monster fish are lurking beneath the surface. Within a remarkably diverse ecosystem, the team searched for giant piranhas, painted catfish and may have even found a new species of fish unknown to science.

Apart from his travels to the world’s most exotic places, Hogan also often speaks at ecological presentations throughout the world. This Friday, at 7:30 p.m., Hogan will give an illustrated lecture to the Sierra College Natural History Museum in Dietrich Theater on the Sierra College-Rocklin Campus. Hogan will also speak at a banquet for the Truckee River Fly Fishers on Saturday, March 5.

For more information about Hogan’s work, visit www.megafishes.org and http://environment.nationalgeographic.com/environment/freshwater/about-megafishes-project/.

Nevada’s land-grant university founded in 1874, the University of Nevada, Reno has an enrollment of more than 17,000 students. The University is home to one the country’s largest study-abroad programs and the state’s medical school, and offers outreach and education programs in all Nevada counties. For more information, visit www.unr.edu.