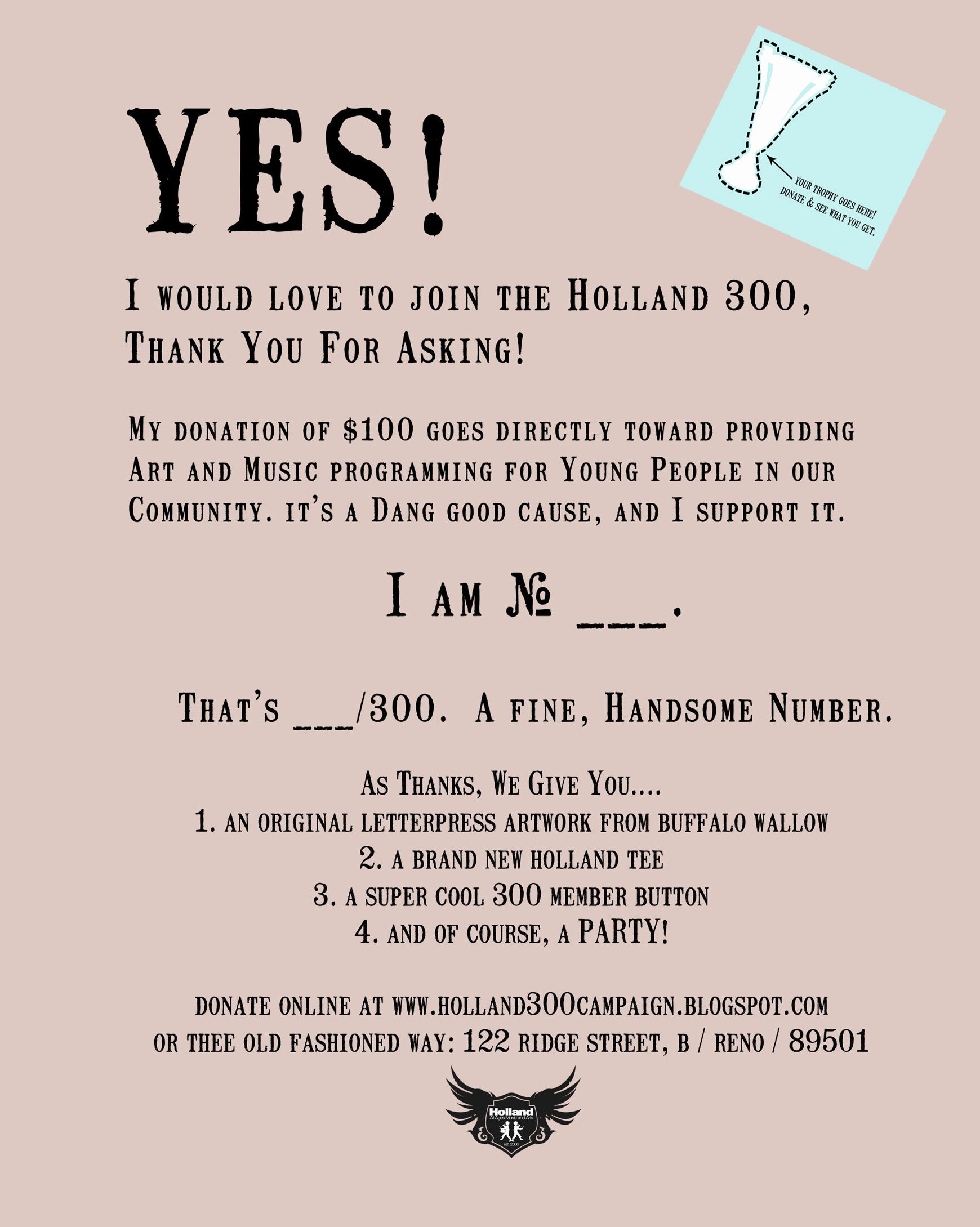 “The first step – especially for young people with energy and drive and talent, but not money – the first step to controlling your world is to control your culture.  To model and demonstrate the kind of world you demand to live in. To write the books.  Make the music.  Shoot the films.  Paint the art.” — Chuck Palahniuk

Last year, in the midst of an economic recession, the Holland Project found itself in middle of a financial crisis. City and state funding to youth programs and to arts programs had been cut – (in some cases, by more than 60%) – and non-profits everywhere were hit hard. Some were forced to close, some had to cancel programming and services, some laid off staff.  It was time to rally.

We launched the Holland 300 Campaign in an effort to fight back and curb the  losses to public and private funding.    We turned to our friends, family, and community to gather support. The goal: 300 people donating $100 each. The response was incredible and overwhelming.  Within a couple months, Holland met its goal and was able to make up the loss in funding by sheer power in numbers and an incredible matching grant from the Draper Family Foundation.  We’ve never been so proud to be part of such a supportive community.

It’s back.  After talking to many of the Holland 300 members this past year, we have learned that many wanted to make this campaign a yearly project.  We, of course, love that idea.  We can’t think of a better way—especially as the economic climate remains uncertain—to be powered in part by our local community and our friends. Nevada still remains at an almost all-time low for funding to youth programs and the arts, and now, more than ever, we need the support of our community and our friends.

And here’s what we do for you:

Because you are donating $100 or more to us, we want to give you something in return.  Holland 300 Members will receive an awesome Holland t-shirt, a button, a specially designed e-trophy, an original postcard print designed by Buffalo Wallow, and an invitation to a  thank-you gathering once we reach our goal! We’ll also document this effort by adding your name to the list of supporters who’ve joined this campaign (and link to your or your business’ website), showcasing the amazing power of this town and the people who believe in all-ages art and music.

Also, you’ll be a part of the Holland 300, which continues to carry more value (for us, and for the young people in our community) than anything we could possibly give you.

THANK YOU for considering donating to Holland Project and joining the Holland 300.  Your donation is fully tax-deductible and goes directly to providing all-ages programming to young people in the Truckee Meadows.

With a ton of respect,

TO JOIN THE HOLLAND 300 IN TIME FOR THE HOLIDAYS!