There are many arguments over methods in economics. For instance, during the depression, when GDP was invented, we were an industrial nation. Now that we have become a service based economy, many economists question the validity of GDP as an accurate measuring device. There are other lesser disagreements that at times become mind-numbingly arcane, but one statistic that is difficult to misinterpret is income. There are traps for the unwary, like full-time versus part-time employment and comparing total, or per capita income, to population trends. One can get lost in the maze pretty quickly. Looking at income democratizes the economy in a way that corporate profits and industrial output don’t. The trick is to keep the questions simple. How do people in Nevada make a living? As a group, how well, or not so well, are we doing? Are there any clues on how we might avoid another economic train wreck in the future?

Thanks to the REAP website and the BEA‘s new interactive regional section, there are now quite a lot of statistics for our area published on the web. With my growing familiarity with Open Office, I’ve begun assembling a spreadsheet that is already turning into a monster. But, undaunted, I’ve made some charts that will begin to answer some of the questions. I intend to follow the numbers wherever they lead, and I’ve already found some surprises, at least, they surprised me. 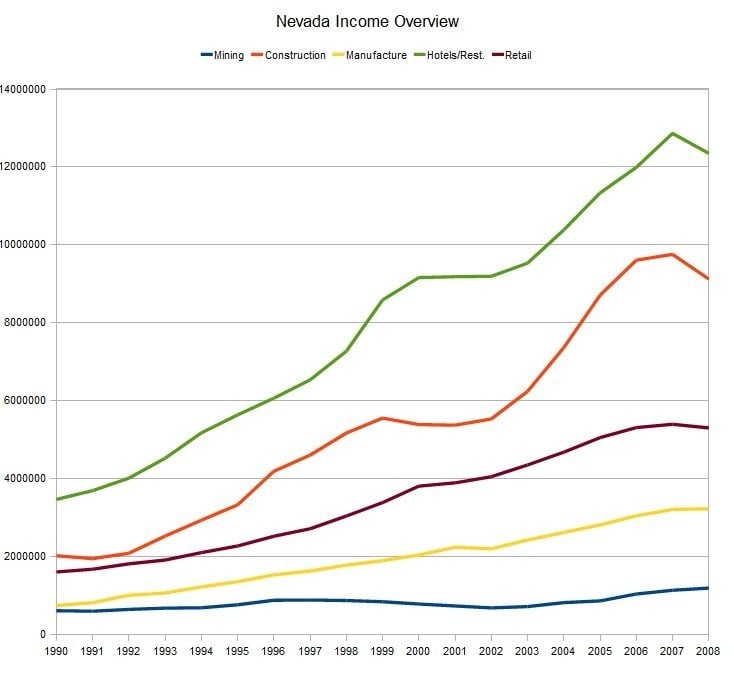 The first surprise is in mining. The stability of the trend line can be accounted for by the fact that there have been no major discoveries lately, but why the low level? For all the attention mining gets, there seems to be few Nevadans who make their living this way. Mining does provide a base of support for other businesses and this is something I’ll want to look at in a future post.

As I dug around some more, I began to wonder about the low numbers in the basic commerce categories. If we don’t make much from mining, manufacturing, or retail, then how do we make a living here? I switched from looking at categories to just looking for large numbers. I found some in a category called, “Interest, Dividends, and Rents.” 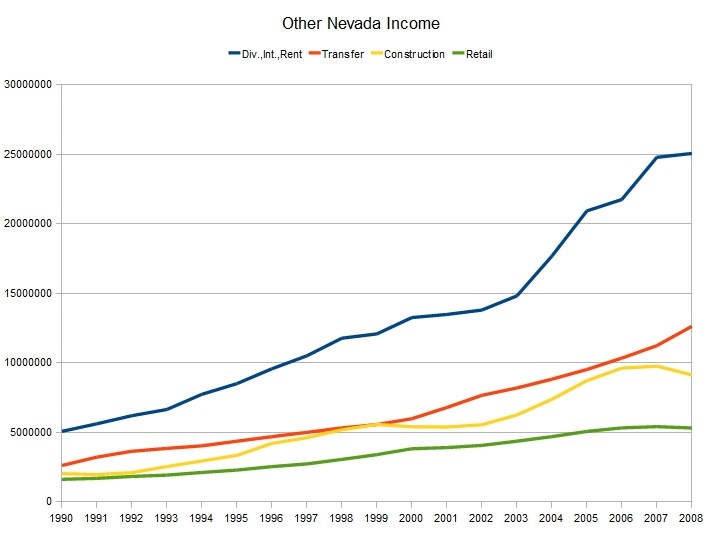 I included construction and retail from the previous chart for reference, along with the ever increasing transfer payments. Assuming that the rents make up the lion’s share of the amount, I can only conclude that we seem to be a society determined to create living space for people who really don’t buy very much. In other words, we have an economy not so different than that of a Carribean island nation; a few hot spots for the tourists with a lot of low wage workers and an ever increasing amount of government involvement just to keep everybody alive.

One benefit of the Great Recession will be that we now have the opportunity to ditch this economic model and replace it with something more sensible. Whether we will or not is an open question, but the chance to do so is upon us.

In a post to be published soon, I’ll look at Reno/Sparks in detail and eventually a look at the importance, or non-importance of mining.