End the Fed: A review 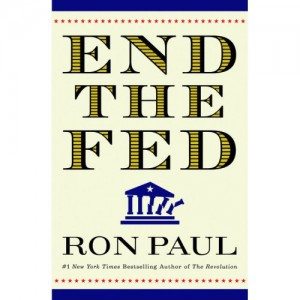 Congressman Ron Paul’s new book, “End The Fed” is an excellent book, especially if you’re of a libertarian mind. If not, there are still several good arguments for the abolition of the Federal Reserve Bank that could have mass appeal. Speaking as one who was sympathetic with Dr. Paul’s rEVOLution in 2008, I can see that this book could be written off as the work of a crackpot by Dr. Paul’s opponents. The good doctor just can’t help himself from wandering off the main subject and onto some of the more esoteric avenues of libertarian philosophy. That’s unfortunate as there is a core of truth here that non-libertarians need to realize.

The book starts with a simple explanation of what fractional reserve banking is and how it works. This is worth the price of the book all by itself. The idea that debt can be used as a form of collateral is central to the inherent dishonesty and ultimate instability of the system. It causes money to become unnaturally “elastic”. Far from creating wealth as its proponents claim, this elasticity only creates the illusion of wealth. It causes new money to be created, but there is no corresponding new labor, no new production, and no new assets. This is the very definition of inflation. The ability to create inflation is the root cause of political favoritism, crony capitalism, corruption, military adventurism, massive public debt and a host of lesser ills.

An honest currency is a benefit to any honest person, no matter one’s political stripe. The economics of a sound currency cannot be separated from its moral justification. An honest dollar breeds honest business dealings, honest government, and an honest society. Accounting tricks and false promises breed suspicion and distrust. It’s no coincidence that even socialist Senator Bernie Sanders is on board with the idea. I doubt if it was the free market argument or the strict interpretation of the Constitution that persuaded him. I can only surmise that it was the moral argument that he found convincing. The great mass in the middle could be persuaded as well.

Some may be asking, “If we abolish the Federal Reserve, what do we replace it with?” The answer is the same thing that all 50 state governments have, and every county and city government too; Nothing. Governments do fine with taxes, fees and bonds. There is no reason why the Federal Government could not do the same. Regulation of the money supply could easily be handled by the Treasury Department, which unlike the Federal Reserve, is accountable to the people.

The Federal Reserve Bank has been the bane of libertarians for decades. There are plenty of valid reasons outside of libertarian philosophy to abolish it. With the current financial mess, the Fed’s record of failure is now apparent to all, and there is no simple reform or granting of new powers that will change that. This is no time to be preaching to the choir. It’s the other 98% of America that needs to hear this, and now that we have their attention, it’s important to remember the first rule of business: Don’t scare the customer.

Ron Paul to be honored with Barry Goldwater Award at...

OPINION: The Ron Paulbarians are at GOP’s Gate