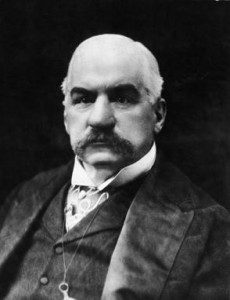 In 2007, a book was published called The Panic Of 1907 as a way of documenting the crisis on it’s 100 year anniversary. My original interest in the 1907 panic is that it was the last in a series of panics that led to the creation of the Federal Reserve System. Although the authors don’t spend a lot of time on how this panic led to the Federal Reserve, it turned out to be a great history book anyway.

Starting with the San Francisco earthquake and the drought in Egypt in 1906, the authors show how these two unrelated events affected the movement of gold bullion around the world. As money was growing scarce in New York, Fritz Heinze, owner of the United Copper Company attempted a short squeeze that brought down the Mercantile National Bank. It would be the first of many bank failures.

Looming throughout, was J.P. Morgan, “Pierpont” to his friends. At the time he was the richest man in the world, semi-retired, and whose main interest was building an art collection. No one else had the financial weight, trust, or abilities to influence like he did. He would become the indispensable man during the crisis, and earn him a congressional investigation when it was over.

Unknown to the publishers, 2007 would see another banking crisis. They have since added another chapter that compares 1907 with 2007. It ends with the TARP bailout in 2008. There are several things these two crises have in common: system complexity, collective action, and the psychology of crowds among other things. Of particular interest was information asymmetry.

In boom times, banks can operate with quite a lot of information asymmetry. That’s why they call it “trust”. In a downturn however, trust disappears along with any sense of co-operation, replaced by a game of cut-throat poker. Who has the high cards and who’s bluffing. When a banker approached JP Morgan asking for a bailout, the first thing J. Pierpont Morgan demanded was to see the books. He had to know what the guy had, and more importantly, what he didn’t have. Only then could he make a rational decision as to what was needed.

With the Federal Reserve System, the US taxpayer now plays the roll of Mr. Morgan. The differences being that we’re broke too, we have no knowledge of where our money is going, and nobody listens to us. As Pierpont once put it, “Open the books, or find another banker.”