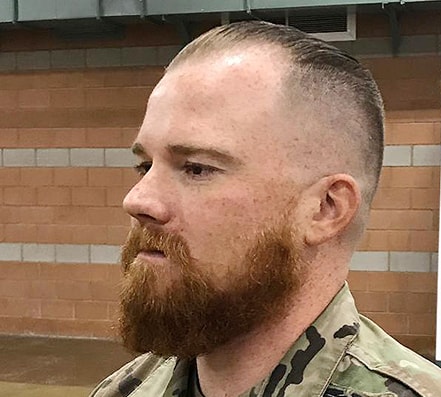 Hopper requested the accommodation based upon his Norse Pagan beliefs. Succinctly, Norse Paganism is a polytheistic religion (multiple Gods) that is based on ancient beliefs and practices associated with the geographic area of Scandinavia. Norse Pagans may choose to have the Hammer of Thor emblem placed on their Veterans Administration-issued headstones and markers.

As military regulations and policies surrounding religious tenets continue to evolve, it’s likely visible signs of religious accommodation – including beards and the wear of a hijab, headscarf, turban or patka with uncut beard and uncut hair – will increase in the Nevada Guard’s ranks. According to the Nevada Guard’s Chaplain’s Office, two other Pagan Soldiers are also pursuing a waiver to wear a beard. Their requests will be reviewed by Brig. Gen. Ondra Berry by mid-February. (Senior Master Sgt. Laura Magee was approved to wear a hijab with her Air Force uniform in 2017-2018, but she currently opts to wear standard Air Force head gear.) According to the Nevada Army Guard’s and Air Guard’s personnel offices, the state has eight Guardsmen – four Soldiers and four Airmen – who declare Pagan as their religious preference.

Hopper, 34, of Madison, Alabama, said he has been practicing his Norse Pagan faith for about two decades and he noted his beliefs complement the Army Warrior ethos. He cited documents on the Skegg (Norse beard) that underscore the fact beards are seen as a sacred and defining feature of masculine men. He keeps the memorandum for record approving his beard on his person as he works on explosive ordnance disposal missions across southern Afghanistan should anyone question his facial hair.

“My personal faith is deeply tied to the modern warrior lifestyle that I have been able to live during my military career,” Hopper said. “In short, it is honoring the pillars of Heathenism, our ancestors and ancient Gods and way of life.”

Hopper said his beard has led to several inquiries while he’s been deployed.

“Regardless of why, the wear of a beard while in uniform does tend to raise a number of questions,” Hopper said. “I’ve been brought before some fairly high-ranking individuals to explain the situation as it is a newer process in the Army. Once I present my memorandum for record and cite all of the applicable regulations and directives, the focus on the beard tends to go away, for the most part.

“I see it as a phase very similar to when the Army authorized the wear of black socks during the fitness test. It is something new and authorized and you will always encounter people who do not like change – that is just life.”

Hopper said a memorandum from the Office of the Assistant Secretary of Defense dated March 27, 2017, that included Pagans as a recognized faith group was a key document that gave some gravitas to his desire for a religious accommodation. That same memorandum also recognized and gave new religious preference codes to more than 100 other faith groups, including Sikhs and Muslims, two religious groups often associated with religious accommodation. Adult Sikh males are required to wear beards and conservative Muslim women must wear head coverings under the tenets of their faith. (The Nevada Guard currently has eight Soldiers and three Airmen who list Islam as their religious preference, according to the respective personnel offices.)

Upon the release of the memorandum, Hopper realized he was now in a recognized faith group and could begin his pursuit of the religious accommodation of a beard. Pursuant to Army Directive 2016-34, he began his request for waiver to a grooming policy with a written request to his commander. The request eventually wound its way to then-Adjutant General Brig. Gen. Bill Burks, who was the first General Court-Martial Convening Authority officer in Hopper’s chain-of-command and was the approving authority.

Current requests for religious accommodation will be determined by Berry regardless if the Nevada Guardsman is deployed or stateside. (Although the doctrine differs between the military branches, the request process for Soldiers and Airmen is very similar.)

An additional stipulation Hopper met and is required by other religious accommodation pursuers is an interview with a chaplain to determine the religious basis and sincerity of the request. The chaplain is not required to recommend approval or disapproval, but he or she may do so.

A legal advisor will review the request packet and may make a recommendation on the request to the GCMCA officer. A complete waiver packet includes the individual’s written request, the chaplain’s interview memorandum, the legal review and recommendations from the chain of command.

Surprising to many is the Army’s statement that it will approve requests for religious accommodation whenever possible.

“The Army will approve requests for accommodation of religious practices, unless accommodation will adversely affect military necessity, including unit readiness, individual readiness, and health and/or safety for soldiers and units,” states All Army Activities message No. 002/2019.

Joint Force State Chaplain Maj. Donald Crandell said his staff is glad to help Soldiers and Airmen obtain sincere requests for accommodation. He underscored his opinion that religious accommodation should remain an extraordinary step to denote faith or belief while on military duty.

“The chaplain corps will work with any military member to aid them in a genuine pursuit of an accommodation,” Crandell said. “However, we are not actively promoting a trend in this direction or seeking to normalize it.”

Although most of the world’s armies, including Canada’s, are allowed facial hair, the U.S. Army orders its troops to remain clean shaven and is reluctant to allow beards because “beard growth consistently degrades the protection factor provided by the protective masks currently in the Army inventory” according to ALARACT 002/2019. Even with his memorandum for record, Hopper’s accommodation could be suspended by his local commander should the threat of toxic exposure occur in Afghanistan.

In a similar vein, Soldiers and Airmen who receive accommodation for religious headgear must still wear all required protective headgear.

The regulations for beards are spelled out in AR-670. Basically, beards must be groomed and professional in appearance and the length of the beard hair will not exceed two inches.

“I have had absolutely no hindrance to my professional performance or accomplishment of the mission due to my beard while deployed in Afghanistan,” Hopper said. “I do get up a little earlier than others to make sure it is in accordance with AR 670-1, but that is about it.”

Submitted opinions do not necessarily reflect the views of This Is Reno. Have something to say? Submit an opinion article or letter to the editor here.