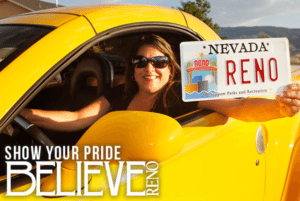 The Nevada Department of Motor Vehicles (DMV) confirmed today that the City of Reno did not sell enough Reno license plates to keep the plates in circulation.

That means that the plate is no longer available for purchase as a charitable license plate through the DMV, said DMV Public Information Officer Alex Smith. “People can keep their plates as long as they want, but new ones will not be available.”

Plate sales benefit parks and recreation programs throughout the city. The city pushed plate sales through public relations and advertising campaigns, even offering free parking on Fridays for plate holders.

The city did not return a request for comment by time of publication and earlier said it was waiting for plate counts from DMV before responding to questions about the fate of the plate.

Smith said that there is a seven-year waiting period for new plates, and the city would have to reapply to make them available again.