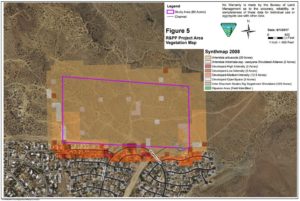 An agreement between the school district and Sun Valley General Improvement District states the school district will pay 67 percent of the almost $2 million cost of the water main project. This includes putting in polyvinyl chloride pipes, also known as PVC pipes, along with replacing 63,000 square feet of asphalt, and putting in several 48-inch manholes.

The school district will pay the entire $1.3 million for the sewer main project, which includes 35,000 square feet of asphalt repair, the agreement states.

The 1,400-student capacity middle school in northern Sun Valley will be built on Bureau of Land Management property and modeled similarly to Depoali Middle School in South Reno. It will house sixth through eighth graders and is scheduled to open in fall 2019.

Funds to build the school are being paid for by a voter-approved sales tax increase that is expected to raise $781 million during the next nine years to build 15 new schools. Such dollars can go only toward construction of and refurbishing of facilities and cannot be used for teacher or administrator salaries or other school operations.

Consumers saw the sales tax increase from 7.725 percent to 8.265 percent this past spring.