By Bob Conrad Published: August 21, 2017Last Updated on April 11, 2019
Sec. 8.10.015 – No climbing on structure. (a) It shall be a misdemeanor for any person to climb, walk upon, jump from, stand, sit, or lay on any public structure not designated or customarily used for such purpose, or prohibited by posting. (b) “Structure” is defined as any physical improvement or facility including building, bridge, sign, parking meter, street light, traffic signal, fence, wall, utlility box, or art installation. 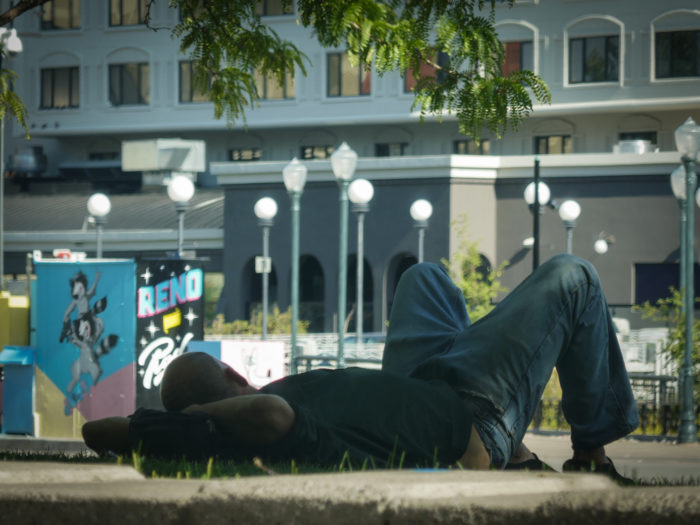 ACLU OF NEVADA STATEMENT: “We urge the Council to refrain from passing ordinances that may
interfere with a person’s ability to access public spaces, or, at minimum, refrain from enforcing
such policies when services are unavailable.”

The City of Reno’s proposed vagrancy ordinances, scheduled to be discussed at Wednesday’s City Council meeting, target specific behaviors, and in particular, the homeless, according to critics of the rules aimed at cleaning up downtown.

A number of rules, put under an umbrella called vagrancy ordinances, would make it illegal to:

According to city documents, a person convicted of violating sections of these codes,

“shall be punished in lieu of all or part of any fine of imprisonment that may be imposed for the commission of the misdemeanor, a penalty of a minimum of eight hours to a maximum of 200 hours of community service. The community service shall be performed within (downtown Reno).”

Community service — cleaning up trash downtown — is the punishment, if convicted.

These new rules have drawn criticism and support.

Holly Wellburn of the Nevada ACLU, said the ordinances could violate civil rights:

“Homelessness and poverty cannot be explained as resulting from ‘natural’ economic differences. These conditions are largely a result of denials throughout this country’s history of equal treatment because of race, sex, ethnic background, religion, and physical defect or condition. Poor people are frequently denied civil liberties because of the stigma attached to their economic dependence on government. The failure of society to fully solve the problems of poverty inevitably results in continued subjugation of the poor to violations of their civil liberties and civil rights, out of proportion to their numbers.”

Henry Sotolo, a local attorney who frequently defends the indigent, called the proposed ordinances a step in the right direction.

“It seems to be a more humanitarian approach to it,” he said, noting that before an arrest, the Reno Police Department would first steer violators to available services, such as the local homeless shelter. “Arrest is not the first option. It looks like they’re trying to direct to resources first, which is a good approach to take. They’re attempting to comply with case law.”

J.D. Klippenstein, executive director of Acting in Community Together in Northern Nevada (ACTIONN), was more critical.

“Without a significant increase in affordable housing options in our community, these ordinances will negatively impact homeless folks and place even more of a demand on social service providers and law enforcement,” he said.

Sotelo added that if the city is serious about these new rules — in addition to increasing affordable housing and services to the poor — “it’s a good step. The people I see a lot of times don’t have resources. If officers are well-trained on the process, then it should work out well. The language looks appropriate. I see it as a positive step.”

It depends. Vagrancy laws migrated from England to America in colonial times and ultimately were challenged in the 1960s. While many such ordinances have been found to be unconstitutional, if specific enough, their constitutionality can be affirmed.

“Two features of vagrancy laws made them especially attractive,” said Risa Goluboff, dean of the University of Virginia School of Law and author of Vagrant Nation. “First, the laws’ breadth and ambiguity gave the police virtually unlimited discretion. Because it was almost always possible to justify a vagrancy arrest, the laws provided what one critic called ‘an escape hatch’ from the Fourth Amendment’s protections against arrest without probable cause.

“As one Supreme Court justice would write in 1965, vagrancy-related laws made it legal to stand on a street corner ‘only at the whim of any police officer.’”

A feature of Reno’s vagrancy ordinances is that they target specific behaviors and areas. Strict anti-vagrancy laws can be held up in court if considered narrow enough — if not, they may not be affirmed by a court.

The National Coalition for the Homeless posted on its website numerous court challenges made to what the group called the criminalization of homelessness in U.S. cities. And some legal scholars said that vagrancy ordinances are inherently discriminatory. Authors from the Seattle University School of Law wrote of a briefing paper and said:

Reno attorney Jerry Snyder said at least one of the proposed rules is vague enough that its enforcement could be challenged.

“The Ninth Circuit held that an ordinance that criminalized sitting or lying on the sidewalk in (Los Angeles) violated the Eighth Amendment prohibition on cruel and unusual punishment,” he said. “The court held that because the statute was not limited to any particular place, but outlawed sitting or lying everywhere, it basically made the status of homelessness a crime.

“(Reno’s) ‘spitting’ ordinance may be subject to a similar challenge. It broadly prohibits behavior that is often an unavoidable consequence. There is no intent requirement. My un-researched, from-the-hip view is that this ordinance is so broad as to make it questionable,” Snyder added. 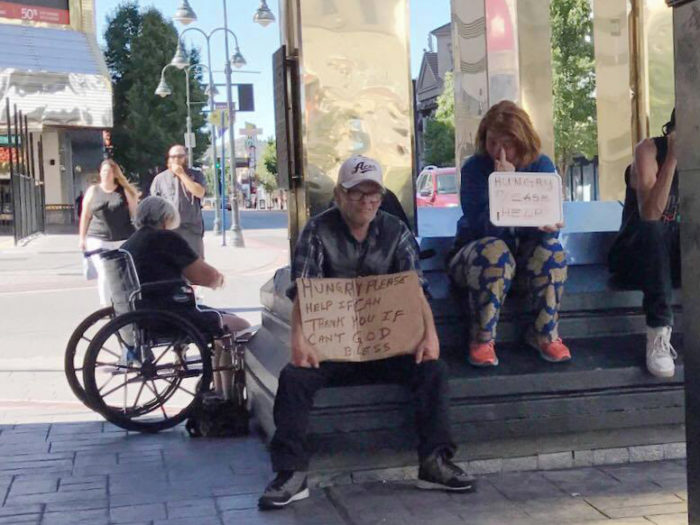 Sec. 8.10.015 – No climbing on structure. (a) It shall be a misdemeanor for any person to climb, walk upon, jump from, stand, sit, or lay on any public structure not designated or customarily used for such purpose, or prohibited by posting. (b) “Structure” is defined as any physical improvement or facility including building, bridge, sign, parking meter, street light, traffic signal, fence, wall, utlility box, or art installation. — City of Reno Draft Code Ordinance. Image: Dana Nollsch.

Legal or not, many question whether anti-vagrancy approaches are the best way to address issues surrounding poverty and houselessness.

Minneapolis recently repealed its anti-lurking and spitting ordinances “after criticism that they encouraged racial profiling. Mayor Betsy Hodges called the laws ‘antiquated’ and ‘unnecessary’ and spoke of helping ‘enable more equitable outcomes,’” according to a report at CBS news.

It’s not clear if the Reno City Council will approve the ordinances. The fact that they are on the agenda for Wednesday’s meeting shows that the city has been keen on clean-up efforts downtown.

“Rather than dealing with the downstream results of the housing crisis, now is the time to be prioritizing upstream solutions such as identifying and/or creating local and regional funding mechanisms for affordable and workforce housing,” said Klippenstein of ACTIONN. “At the end of the day, anti-vagrancy ordinances will not be able to create a vibrant and thriving downtown in a city where more and more people cannot afford to live.”

Other experts said that vagrancy laws are stop-gap measures and are both expensive and somewhat ineffective, and that so-called “housing-first” initiatives are more successful in the long run.

The National Coalition for the Homeless insisted that housing should be a first effort, not vagrancy ordinances.

“These practices that criminalize homelessness do nothing to address the underlying causes of homelessness,” the Coalition wrote in a 2006 report. “Instead, they exacerbate the problem. They frequently move people away from services.

“When homeless persons are arrested and charged under these measures, they develop a criminal record, making it more difficult to obtain employment or housing. Further, criminalization measures are not cost efficient.”