By ThisIsReno May 2, 2017
Mary Simmons of NV Energy and Kylie Rowe of Dickson Realty

By Kylie Rowe | @KyRoBiz
Kylie Rowe is the Vice President of Corporate Relocation at Dickson Realty, an ambassador for Reno, Sparks and Lake Tahoe.

In a recent video interview, Mary Simmons the Vice President of Business Development and Community Strategy at NV Energy discussed why Nevada is a great choice when considering energy costs and the decision to relocate. Mary Simmons discussed our electric rates compared to other states, our diverse renewable energy portfolio, and NV Energy’s tradition of giving back to the community. 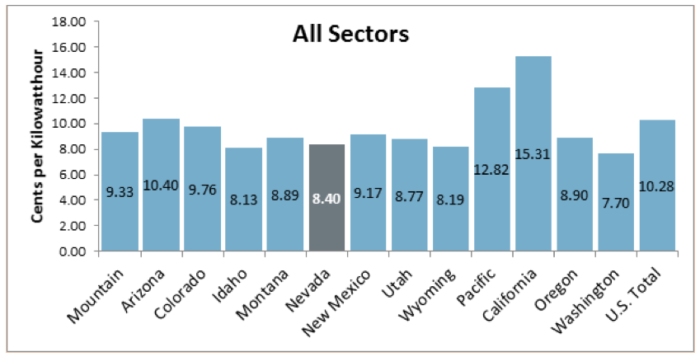 Numbers do not include taxes. Nevada’s numbers do not include franchise taxes or the UEC. The REPR, TRED, and EE rates are included.
The charts above represent rates charged over the period January 2016 thru December 2016.
This table is an average and should not be used to determine costs for a specific project or client. All numbers represented are cents per kilowatt-hour.
Source: U.S. Energy Information Administration

NV Energy customers continue to benefit from one of the most diverse renewable energy portfolios in the nation. Currently, customers are benefiting from 20 geothermal projects, 11 solar projects and about a dozen wind, biomass, hydro, and waste heat renewable energy projects.

More NV Energy customers also have been taking advantage of renewable energy incentives in the past year than any previous year in the history of the company. NV Energy has provided more than $213 million in special incentives for rooftop solar installations and solar water heating.

All of these combined efforts resulted in NV Energy being named among the top 10 utilities that integrated the most megawatts of solar energy in the United States in 2015 by the Smart Electric Power Alliance (SEPA).

NV Energy has a strong tradition of community involvement. They understand that part of delivering reliable energy service is a commitment to be an involved and responsible corporate citizen. Their social responsibility strategy is designed to improve the quality of life for the people who live and work in service territories throughout all of Nevada. They do this through their financial contributions, sponsorships, employee volunteers, executive involvement on nonprofit boards, in-kind donations, and community partnerships. In 2016, NV Energy and the NV Energy Foundation donated over $5.4 million to various non-profits throughout the state of Nevada.

While it is always important to step forward to help communities in need, it is doubly important in difficult economic times. NV Energy is proud of its long tradition of giving back to the communities it serves. At the same time, they are equally pleased that every year their employees volunteer their time and efforts to worthwhile causes that make Nevada’s communities better places to live and work. In fact, NV Energy employees, retirees and their families donated over 37,500 volunteer hours in 2016.

Moving to Nevada? Go to NVEnergy.com and scroll down to the moving tab which gives all the information necessary to set up new service. | @NVEnergy | @MaryOSimmons