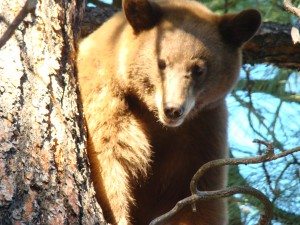 A Nevada Department of Wildlife (NDOW) official filed a lawsuit against a Lake Tahoe resident over comments made by third parties on her Facebook page.

Stark was shocked to be served with a lawsuit at the end of March by the self-described “Bear Guy,” Carl Lackey, an NDOW employee. The suit bizarrely tries to assert that Stark is responsible for comments made on the page by other people.

“Well-established case law has shown time and again that content providers are not responsible for third-party commentary,” said Stephanie Rice, attorney with the Winter Street Law Group, which is defending Stark. “Lackey repeatedly inserts himself into the public eye as a public official, including regularly appearing in front of news media and even on the National Geographic Channel.”

Moreover, his handling of bears that are captured in the Lake Tahoe area, and then releasing the bears into a strange territory, which also happens to be where NDOW issues bear hunting licenses, is a cause for concern for many citizens and is therefore a clear matter of public interest.

Our client’s comments on the Facebook page are factual. Any other statement she has made on this Facebook page is opinion and clearly stated as opinion. This is not refuted by Lackey.

Public, government officials are expected to be held to a high standard, and we should be applauding our citizens who encourage a higher level of transparency in government, not suing them and trying to shut them up.

Winter Street Law Group has therefore filed a motion to dismiss the case and will seek redress under Nevada’s Anti-SLAPP (Strategic Lawsuits Against Participation) legislation, which correctly protects people such as our client from vexatious attempts to stifle First Amendment rights.

Lack of DNA evidence wins reprieve for Tahoe bear and...

Black bears under siege in Nevada