Soil samples taken from the University of Nevada, Reno’s Main Station Farm show that mercury concentrations are low, posing no threat to plants, animals, or humans.

Steamboat Creek, which is near the east boundary of the farm, is a primary source of mercury in the Truckee River.

“When we read reports of higher levels of mercury along Steamboat Creek we wanted to be sure our land was not affected,” Bill Payne, dean of the College of Agriculture, Biotechnology and Natural Resources, said in a statement. “It just made sense for us to determine for ourselves what the effects the flooding might have had, and whether current mercury levels had any implications for plant and animal products from Main Station.”

Added biochemistry professor Mae Gustin, “The primary pathway by which mercury enters plants is the atmosphere, and soil concentrations are not of concern, so there is no risk from mercury associated with growing vegetation and organisms at the farm.” 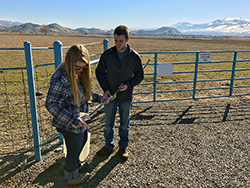 Gustin had several students assist with the mercury soil study. They plotted 26 points across the farm and two on the east side of the connector road in the Steamboat Creek area. Core samples were taken and analyzed from different depths at each location.

A subsequent analysis of the Main Station plot sample distribution by a student in a wetlands ecology class found the numbers suggest that mercury content within the sample cores close to Steamboat Creek were influenced by the mercury content in the water, with slightly higher levels closer to and along the edge of the creek.

The mercury in the creek dates back to the Comstock mining era and has been transported down Steamboat Creek from Washoe Lake for more than 150 years.