By ThisIsReno Published: December 29, 2016Last Updated on April 11, 2019
Jaci and Joe Chambers. struggled through county inspections over engineering requirements for welding and cutting their container house. In the end it was like “building a house within a house.” 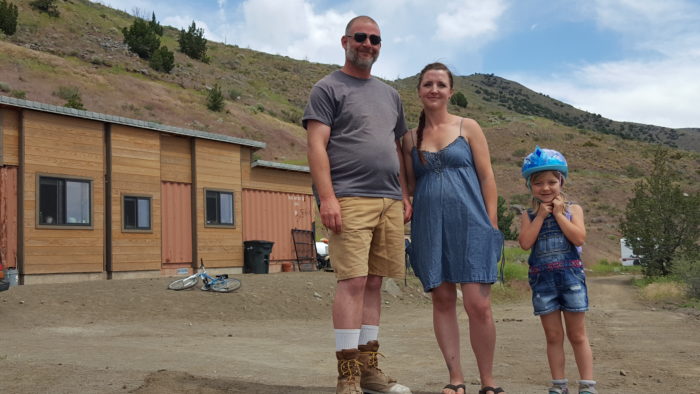 Jaci and Joe Chambers struggled through county inspections over engineering requirements for welding and cutting their container house. In the end it was like “building a house within a house.”

Containers as living and business spaces are all the hype these days. This month, a Silicon Valley billionaire announced he wants to use them to house the homeless.

This past summer, the Reno City Council approved The Eddy, a downtown container park for performance and a bar. But in reality, thinking outside the box like this can be a real headache. Containers in Las Vegas’ Container Park are largely used for play structures and decoration, not all for retail space.

Now, one family north of Reno has built the first county-approved container house in Washoe. In the years-long process they found that, “A stick built house would have been a lot faster and cheaper to build,” said Joe Chambers. He and his wife Jaci struggled through county inspections, over engineering requirements for welding and cutting, and in the end it was like “building a house within a house.”

Still, the Chambers house is a marvel of innovative use of space and sheer hands-on, teeth-grinding American accomplishment that sets them apart, not only being the first in the county, but also truly living the American value of independence from economic and social pressures.

They endured a flood, living in an RV with two children and while pregnant, designing the whole shebang from ground up. Now it is their little piece of paradise and these trailblazers want to help others who are interested in doing the same thing.

There are essential questions like, ‘would they do it again? How has living in a smaller space in a rural environment impacted their family compared to living in their former 2,300 square foot home? What is the “million dollar piece of advice?”

Below is an interview with the answers and you will find that thinking outside the box with their growth mindset has inspired them to build a new business from the ground up that I will later reveal, “this is just the beginning” Joe said.

This 20-minute interview with Jaci and Joe along with pictures takes you on part of the journey of building Washoe County’s first container home.

Kyril Plaskon is owner of the Investigative Reporting Independent Service, a Media Teacher for the Washoe County School District & KUNR and author of Nevada history book, Silent Heroes of the Cold War, Declassified.