By Carla O'Day December 8, 2016
Parcel of Lemmon Valley land annexed by the City. 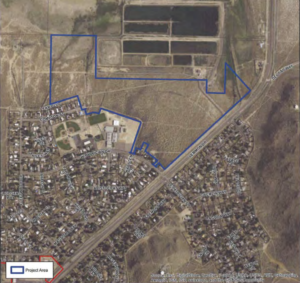 Proposed site of Prado Ranch development, as identified in the map and permit application.

The Reno City Council on Wednesday upheld a decision by planning commissioners to deny a map application to a developer in the North Valleys. The developer had petitioned the council to have the commission’s decision overturned.

The appeal of the October vote by the Reno City Planning Commission was sought by Will Roberts of Lansing-Arcus LLC. Tentative plans show the Prado Ranch subdivision with 130 single family residential lots on 36.3 acres north of the Lemmon Drive-Patrician Way junction. The remaining 41 acres would be undeveloped.

The land is owned by North Valleys Investment Group LLC and was annexed into Reno almost a year ago. Previously it was planned to have about 250 homes if it remained in Washoe County.

“The main concerns were with traffic volumes at the intersection of Lemmon Drive and the future Lear Boulevard, and there was concerns with how the project on Lemmon Drive intersected with the timing of the Regional Transportation Commission’s proposed improvements on Lemmon Drive,” said Jeff Borchardt, city associate planner.

In its appeal, Roberts indicated a traffic study showed the project would add an average of 1,285 daily trips, allowing roads to continue operating at acceptable levels.

He also stated the following:

Borchardt said 2,272 dwellings are already in the works in the area, with a potential for more. A school district representative told council members that Lemmon Valley won’t see a new school until the 2020s.

“Until Lear Boulevard is put into place, there’s only going to be one entrance and exit into that subdivision,” Snow said. “So, that will put everything onto Patrician Drive next to the school. We already have a traffic situation there, so that’s going to have to be addressed.”

Council members expressed concern about conflicting reports about sewer capacity and how the same developer has several other projects in the area, which makes things hard to analyze on a larger scale.