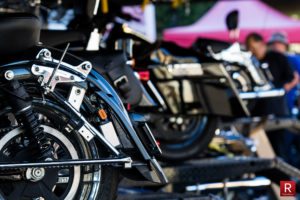 More than 50,000 riders descended on Reno, Virginia City, and Carson City this past weekend, Sept. 21-25, for the 22nd Annual Street Vibrations Motorcycle Fall Rally. The event has become a staple in Reno and a pilgrimage for many riders who come to ride, socialize, and just have a great time.

While there have been some bumps in the road for Street Vibrations, this year’s crime statistics reflect a fairly safe event.

Every year I check out the bikes and the event. This year I enjoyed the event with Ty O’Neil; he took photos and I did some video.

For me the music seemed to dominate downtown Reno. There was a band on every corner playing and having fun. Vendors were also a big part of the downtown Reno portion of the event and it was hard to see the bikes through the vendors. In years past the bikes parked on Virginia Street and you could easily walk down the street and check out the bikes. This year you had to search out the bikes.

The statistics this year seem to show that Street Vibrations was a safe event and a bit more uneventful than in some past years. Here are the official crime statistics: