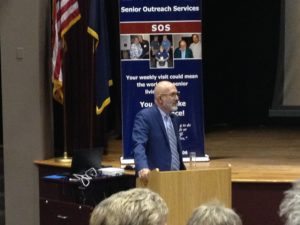 The University of Nevada, Reno’s Sanford Center for Aging kicked off its fall lecture series Tuesday with a discussion on handling the ups and downs in relationships and how to effectively communicate.

While such topic might seem more suited for college-aged students, it’s also important for seniors, since relationships are part of one’s overall well being, according to the Center for Aging.

“Communication is fundamental to relationships and this can apply to any type of relationship,” said Kelley Macmillan, Center for Aging associate director of community and social services.

Macmillan addressed listening and verbal communication skills, among other topics.

“You have two ears and one mouth, so you should listen twice as much as you talk,” Macmillan said. “For me, relationships are about communication. The time you give people makes a big difference.”

Starting sentences with “I” instead of “you” is best, especially in difficult situations, he said. Ask one question at a time and give people time to think and answer. Also, pay attention to one’s body language and queue into whether they want advice or just want someone to listen. Ask if unsure.

“What is it they want? Don’t underestimate the value of listening,” Macmillan said. “Sometimes people just want to be heard. If you get into disagreements, then communication breaks down.”

Macmillan said creating a space free of distractions is ideal and it’s acceptable to encourage people to talk. If someone starts talking about something negative, that’s OK, because maybe they’re frustrated because nobody else has been around to listen to them.

While people can’t change anybody else, Macmillan said people as listeners can come into a situation with a different level of energy and support, which can in turn set a different tone.

Several dozen people attended the lecture and presented scenarios to Macmillan, some asking for advice. Among examples:

The next series event is scheduled from 10 to 11 a.m. Oct. 11 in at the Osher Lifelong Learning Institute’s Warren Nelson Building, 401 W. Second St. Dr. Peter Reed will conduct a community dialing on aging. Admission is free. Call 775-784-8053 or visit http://dhs.unr.edu/aging for more information.