City To Take Up Affordable Housing at Wednesday Meeting

RISE, ACTIONN and the Reno Justice Coalition held a potluck downtown before a city council meeting.

By Bob Conrad and Ty O’Neil

The Reno City Council will be discussing affordable housing at Wednesday’s 1 p.m. City Council meeting at city hall. It’s an issue that three local nonprofits have been tackling, including demonstrations and educational events held last week.

The groups — RISE, ACTIONN and the Reno Justice Coalition — held a potluck downtown last week to raise awareness for low-income housing and homelessness.

Aria Overli of ACTIONN said that she wants the city to do more.

“They’ve basically said it’s not the city’s job, it’s more the county’s job, it’s the federal government’s job to provide affordable housing, so we’d really want them to prioritize it as an issue,” she said.

After serving hot meals to the homeless and others, the non-profit members headed to city council to speak during public comment.

“We came for socially equitable development, mixed-use development, economically integrated neighborhoods and real thought and concern for the people who need your leadership,” according to Mike Thornton, also of ACTIONN.

Councilmembers were quick to explain some of their efforts, including Councilwoman Neoma Jardon, who launched Reno Works, a program that puts the homeless to work: “In one year we have been successful in having four classes, and we have transitioned 27 individuals off the street and out of the shelter and into supportive housing.”

“Maybe it’s on our bad that we are not marketing that or communicating that enough to the community, but we are doing lots of different things for affordable housing and trying to clear that gap,” he said.

Talk of affordable housing didn’t stop at public comment. Later in the day-long meeting councilmembers argued over plans for a development about 15 miles north of Reno.

Train Town is proposing to bring more than 1,000 homes into Reno’s North Valleys. The project is close to another development called Stonegate, a master-planned community that will put nearly 4,000 residences on northwest Peavine Mountain.

North Valleys residents, who said they are already feeling the brunt of gridlock traffic during peak commute times, as well as overcrowded schools, spoke against Train Town. 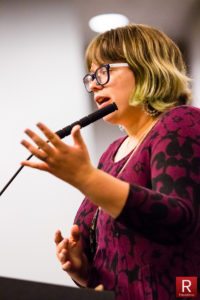 “We have quite a bit of traffic. If any of you have been around Stead, Golden Valley, Red Rock around 5:15 in the afternoon, you’ll see it’s already car-to-car. We’re looking at a whole lot of growth around dry lake as well,” said North Valleys resident Suzanne Freeman.

City council ultimately agreed to Train Town’s zoning map change, a first step in the approval process for the development.

Members of ACTIONN, the Reno Justice Coalition and RISE are concerned that the poor will be overlooked as more developments are built to satisfy Reno’s growth.

“You can have development without gentrification,” Overli said. “We believe that the city of Reno needs to be revived, downtown needs to revived, these communities downtown have been abandoned for decades, and they deserved to be invested in… We don’t agree that development should encourage displacement of people, and that’s what gentrification is — it displaces people.”

“Home prices have recovered and are now approaching pre-recession highs, and rental rates are at an all-time high,” according to city staff. “In relation, the City of Reno is undertaking several planning efforts, including the update to the Master Plan and the Downtown Action Plan, and affordable housing has emerged as a salient issue across each plan.”