Local Author’s Book Series May Be Developed For Movie 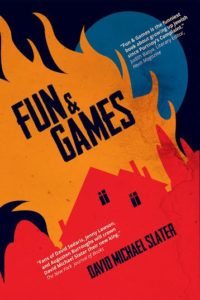 David Slater, 7th and 8th grade English teacher at Pine Middle School in Reno, has also published over 20 books, and will release another in November. The GATE (Gifted/Talented) magnet program teacher has been in schools teaching for over 17 years, but writing for much longer.

Of his books, about 17 are picture books, seven are part of an on-going teen fantasy series, and two are for adults (including his most recent – Fun & Games, which comes out in November). Although Slater’s books belong to varying genres, he says most are humorous and share the trait of silly puns and word play.

Slater’s on-going teen series, Forbidden Books, may even be developed for a film. Slater says it’s currently “in development,” and Kevin Bannerman, The Lion King producer, is working with Karen Janszen, to find a screenwriter. The details are still undetermined, though. Aside from the possible movie, the series will be coming out in China later this summer.

Following that, Fun & Games, Slater’s most recent book for adults will be released in November. Fun & Games is about a dysfunctional (and humorous) Jewish family living in Pittsburgh in the 1980s. Being from Pittsburgh originally gave Slater a vast amount of geographical color and inspiration to draw into the book. Jonathan, the main character, is trying to grapple with with sisters, parents, and grandparents who tackle life with a passion he can’t quite understand.

“The family is Jewish but their traumas and dramas are universal, so I believe all readers can and will relate to it,” Slater explained.

Fun & Games will be released Nov. 17, 2016. Slater’s books can be purchased at any main stream bookstore, but may have to be requested or ordered ahead of time.

Behind the scenes of Katherine Reddick’s new book, Access Denied