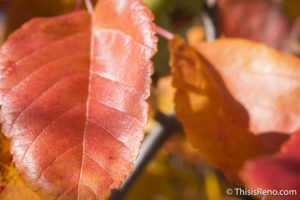 An urban forestry management plan that would almost double the size of Reno’s tree coverage during the next two decades was approved Wednesday by the City Council.

The plan is expected to help guide the city’s efforts to manage its tree inventory and increase canopy size from 5.2 percent to 10 percent. This comes a month after the “ReLeaf Reno” initiative to add 130,000 new trees was introduced on Arbor Day.

Currently 77 percent of city trees are in good condition and 12 percent in fair condition. Eleven percent are in poor or critical condition, but about half of those had been removed since the recent inventory.

“Reno has been losing trees for reasons which include drought, development and insufficient care and watering by the community,” the management plan stated. “Reno’s inventory of public trees has declined about 10 percent over the past 10 years because of drought stress, age, pest infestation and other reasons.”

Urban forestry tree planting funds will increase from $7,500 to $20,000 next fiscal year. Reno also had received a $75,000 grant from the Nevada Division of Forestry.

Councilwoman Naomi Duerr said performance measures indicate the city is planting one tree for every 10 trees it’s removing and that she’d like to see that get to a 1-to-1 ratio. When discussing the budget, she said it’s encouraging that tree planting dollars have expanded.

“Even though it’s a tiny bit of money, it gets us going in the right direction,” Duerr said.

“As we stand now with 18,000 trees, it’s an 18-year pruning cycle and the standard is 7 to 9 years or 7 to 10 years, and we’d like to be at 9 years,” Mann said. “We’re stressed with our ability to maintain what we do own. But what we do own is insufficient as far as tree coverage for the city of Reno.”

Mann noted tree coverage for Las Vegas is currently at 13 percent — more than twice that of Reno. The management plan also said Reno’s arid and semi-arid range land is 18.2 percent, versus 6.9 percent for Las Vegas.

Publicly-owned trees are on street right-of-ways and in 86 of the city’s parks. There are 62 classes of trees that represent 166 species. The most common are pines at 11.8 percent and oaks at 11.2 percent. The largest canopies exist in old northwest and the fewest are in the North Valleys.

The management plan indicated that public support is essential to reaching this goal because 71 percent of available planting locations on on residential property.

Trees properly placed around buildings can reduce air conditioning needs by 30 percent and save 20 to 50 percent in energy for heating, according to the U.S. Forest Service. Healthy, mature trees add an average of 10 percent to property values and trees also reduce air pollution, intercept storm water runoff and stabilize hillsides.

Shoppers in well-landscaped business districts are willing to pay more for parking and up to 12 percent more for goods and services, according to the nonprofit organization American Forests.