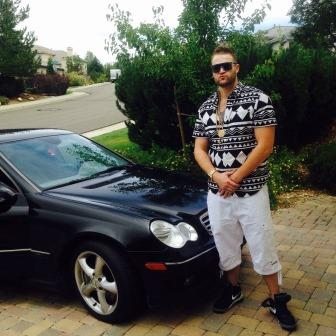 Washoe County District Attorney Chris Hicks has released a report detailing his findings on the August 13, 2015, officer involved shooting of Russell Roberts.  This is the second release of such a report to the public by the District Attorney and is meant to increase transparency in the review of these types of cases.  The shooting was found to be justified by DA Hicks and a copy of the report can be found on his website.

According to the report released today, in the early morning hours of August 13, 2015, Reno Police Department (RPD) patrol officers were dispatched to the Imperial Bar & Lounge in downtown Reno. Officer Chris Johnson was the first to arrive and was directed by witnesses to Russell K. Roberts (DOB 8/21/1990).  According to witnesses, Roberts was in possession of a firearm and had just pointed it at them.  As Officer Johnson approached, Roberts walked to a black Mercedes in the parking lot.  Officer Johnson advised him to stop, but Roberts refused and placed his hand in his waistband leading the officer to believe he was reaching for a gun.  Officer Johnson drew his firearm and again advised Roberts that he was the police and to stop.

An extensive search for Roberts took place.  On August 14, 2015, the black Mercedes was located.  Roberts was found the following day at a downtown Reno motel.  He had gunshot wounds to his legs and was transported to Renown.  Upon release, Roberts was arrested and charged by this office.  He subsequently pled guilty to Battery with a Deadly Weapon and was sentenced to 10 years in prison in February of this year.  On that same day, he was sentenced to a consecutive 4 year sentence in prison for a previous drug offense for which Roberts had an active arrest warrant when he attacked Officer Johnson.

Consistent with the regionally-adopted OIS Protocol, the Washoe County Sheriff’s Office (WCSO) led the investigation and was assisted by the Sparks Police Department.  RPD provided further needed support and the Washoe County Crime Laboratory provided forensic services.  The Washoe County District Attorney’s Office provided oversight and assistance with obtaining search warrants.  All investigation reports, forensic reports, photographs, surveillance video and recorded interviews were then submitted to the District Attorney’s Office in February of 2016, for a determination of whether the shooting of Roberts was legally justified.  No criminal charges were recommended by WCSO.

The District Attorney’s evaluation included reviewing approximately 600 pages of reports and documents including witness accounts. It further included the review of photographs, diagrams, video, recordings of radio transmissions, and examination of the scene of the shooting.  Based on the available evidence and the applicable legal authorities, it is the opinion of the District Attorney that the shooting of Russell Roberts by RPD Officer Chris Johnson was legally justified.  In the report DA Hicks referred to Roberts’s actions by saying, “These acts by Roberts posed an immediate threat to Officer Johnson and the nearby public at large.  In short, Officer Johnson had the right under Nevada law to use deadly force against Roberts both in defense of himself and others and in the discharge of a legal duty.”

Read the report below.

Report on the Officer Involved Shooting of Russell Roberts from ThisisReno

Officer Cleared in 2014 Shooting Near UNR