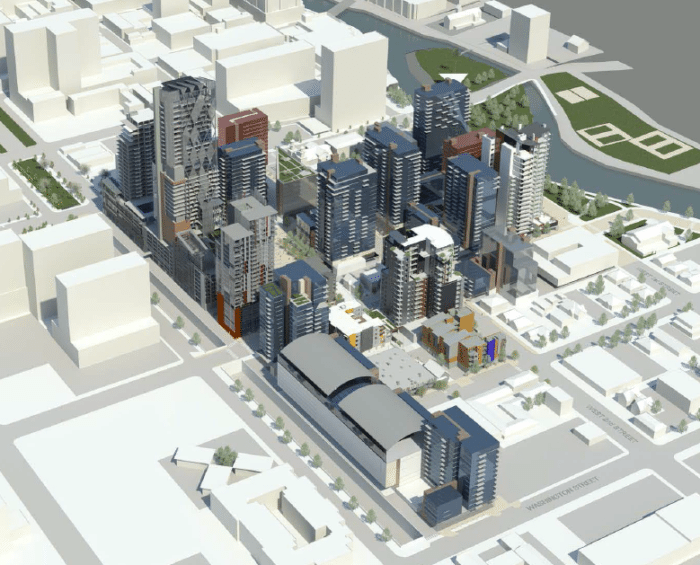 Seventeen acres of infill development in downtown Reno that includes new residential, retail, office, hotel and parking, was proposed Wednesday by a developer to an enthusiastic audience at City Hall.

Reno City Council members voted 4-2 to direct city staff to bring back a list of information about the project needed to have in place to perform due diligence, which will help the city decide whether to enter into a disposition and development agreement.

Bobzien said he voted no because the extra step makes the council seem “difficult.”  The original recommendation was to vote to work with Secundo Vita LLC and the Don J. Clark Group to begin negotiations on an agreement that would include purchase or transfer of public property and potential reimbursement of tax increment financing, which is a public financing method used as a subsidy for redevelopment projects.

The project’s progress would be discussed at the monthly Reno Redevelopment Agency meeting.

The $1.281 billion West 2nd District project proposed by the Reno-based Clark Group would take 6 to 10 years to complete.  It would abut the railroad tracks on West Second Street between Washington Street and North Arlington Avenue. Development would also take place along part of West First Street.

It would create about 2,100 permanent jobs and 4,500 construction jobs. 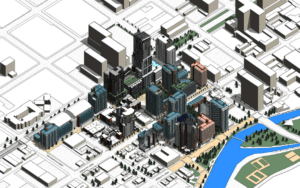 “The West 2nd urban live-work concept aims to make the downtown area more livable, vibrant, and engaging for residents and visitors alike as Reno grows over the next 10 years,” the proposal to the City Council stated. “The project links the expertise of a global business and knowledge network with local business, history, and context, energizing economic development for the region, and will invest redevelopment tax increment funds in community infrastructure and culture up front, supporting education, affordable housing services, public art, technology and research.”

Jens Peter Clausen, vice president of the Tesla gigafactory, said the project could change the perception of the city and create a “new center of gravity” while “challenging the status quo.”

Mark Anderson, Panasonic Energy human resources manager, said he recently returned to Northern Nevada after being gone 30 years.  He left at age 18 because “there was nothing here for me.”

The project could result in up to $77 million in taxes to the city’s redevelopment agency, which is $23.5 million in debt.

Bobzien said the project checks so many boxes on what the city would like to see, but he’s looking at it with healthy skepticism.

“The more focus we have on exactly what it is we’re talking about, we can understand what the gotchas might be,” Bobzien said.  “What is the exposure to parties and exposure to the public if we go forward with this?”

Councilwoman Naomi Duerr said she has never seen large projects not get renegotiated as conditions change, but it’s encouraging the developers already have a team together and have purchased property.

“It’s a lot like getting married.  It’s exciting but nobody wants to talk about the prenup,” Duerr said. “If things don’t go as we hope…I’m looking for what’s the end game and how it comes together.”

Don Clark, Clark Group partner, said each building will be it’s own entity.

“Let us know what you want to do and we’ll get it done,” Clark said. “We’re not trying to hide anything and we’re here to make sure you know we’re serious.”

Seventy percent of apartments in the district will qualify for the Nevada Housing Division’s Home is Possible Program, which provides down payment assistance for those with a qualifying credit score buying a primary home priced less than $400,000. An additional 20 percent of apartments will go to those who earn 80 percent of the median income.

Clark Group Principal Susan Clark said about one-third of the 237 people living in area motels and weekly apartments would need to be relocated because two such building would be torn down.  She said listening sessions are taking place and include the possibility of some housing for seniors and veterans.

Secundo Vita took its first step in March, when it sought approval of a partial alleyway abandonment, located at 235 Ralston Street, north of West Second Street and about 200-feet west of and parallel to Ralston Street. The alleyway is 20-feet wide and 121-feet long and has two-way traffic.

More information on the West 2nd District will be available at upcoming open houses, scheduled from noon to 1 p.m. Thursdays from April 28 though June 2; and from 2 to 4 p.m. Saturdays from April 30 through June 4, with the exception of May 28, at at the Clark Group, 250 Bell St. 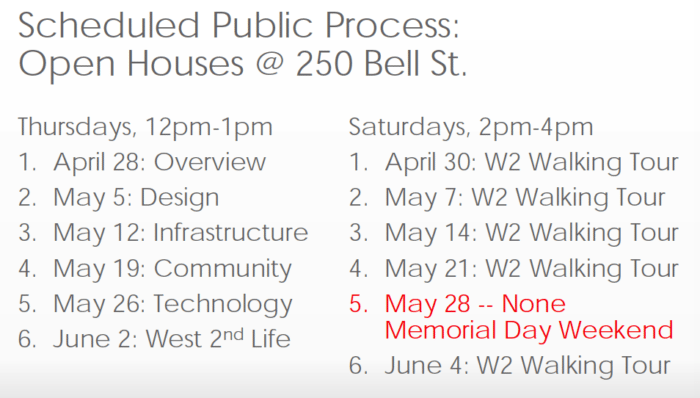