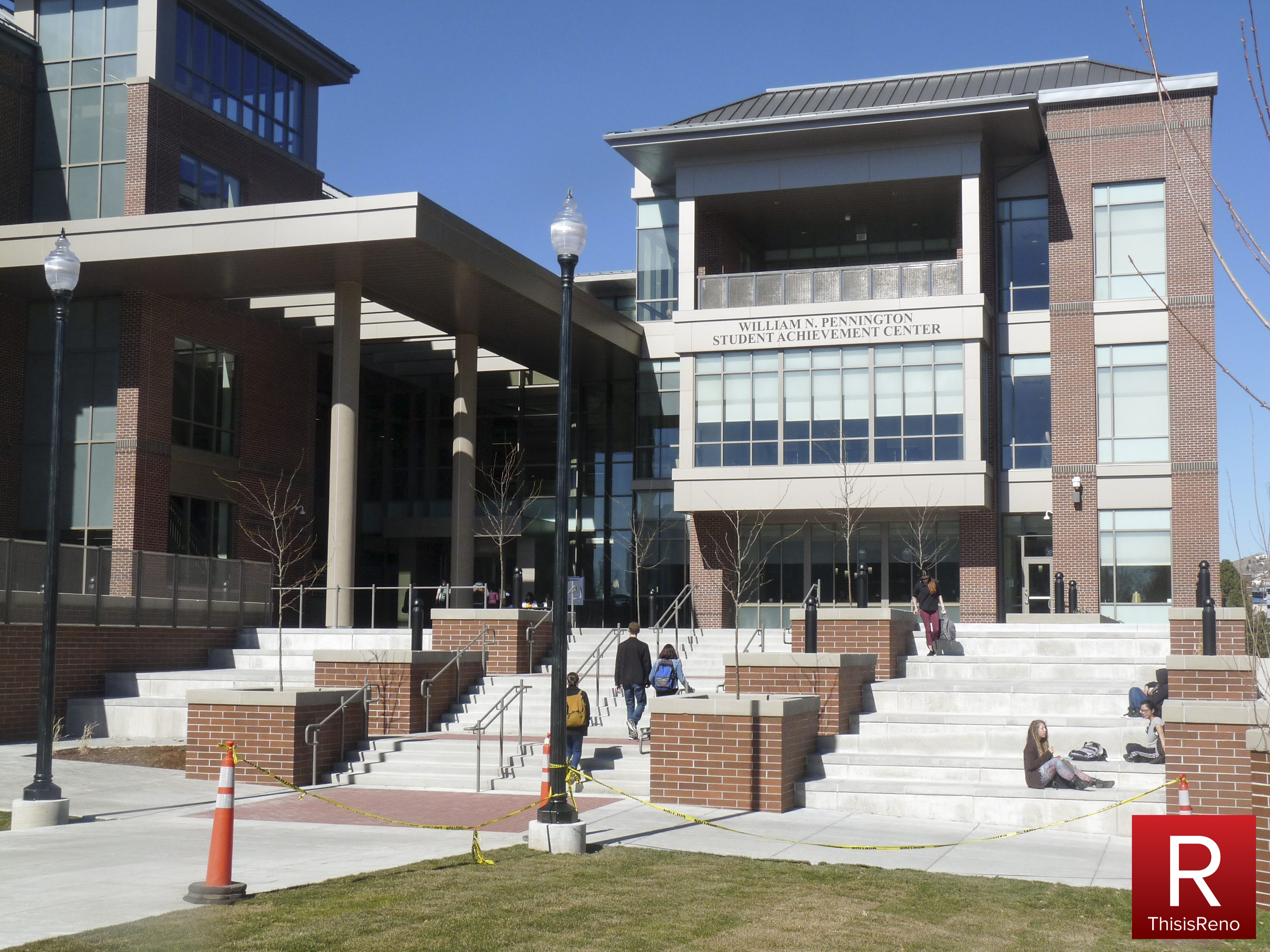 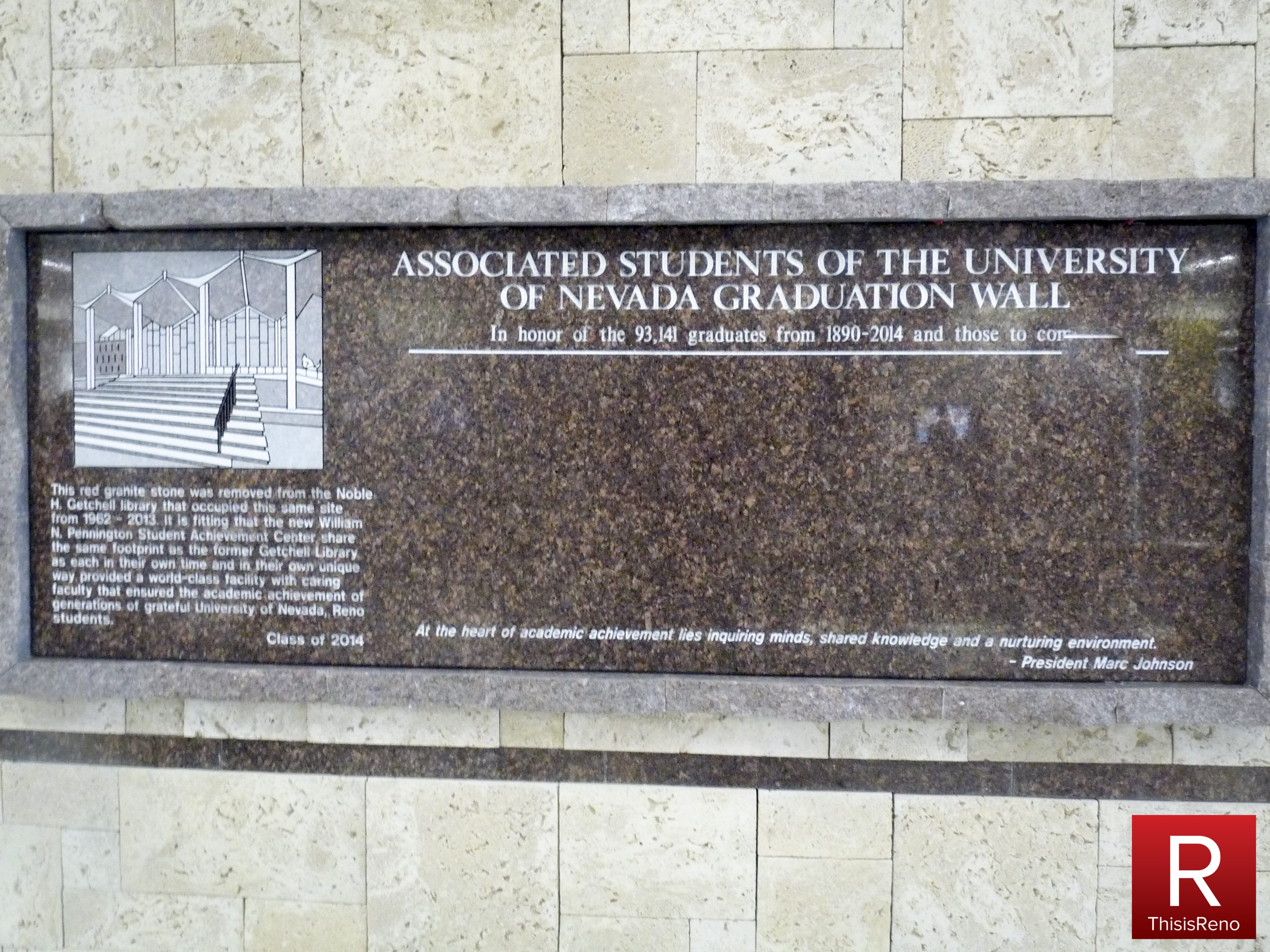 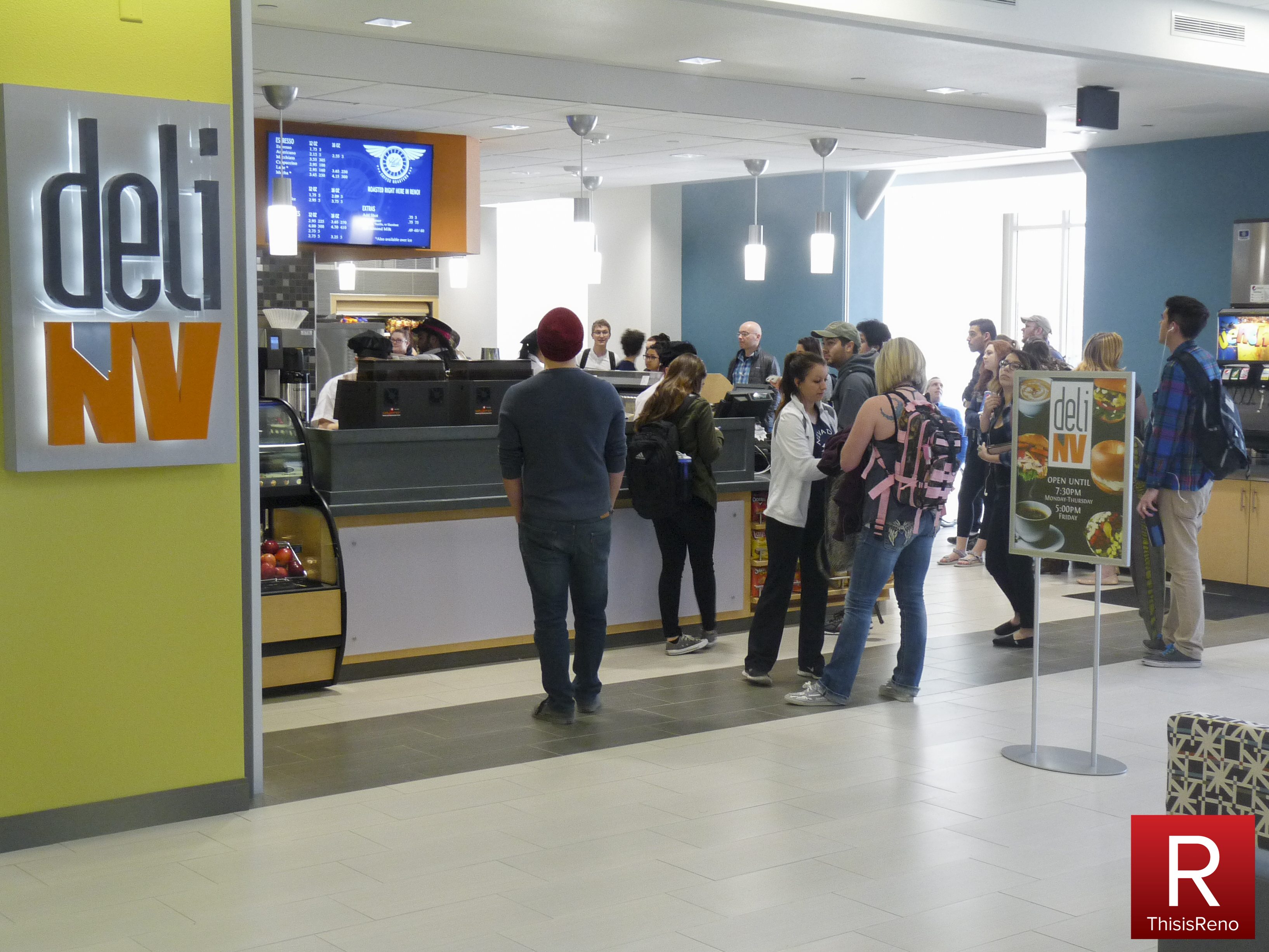 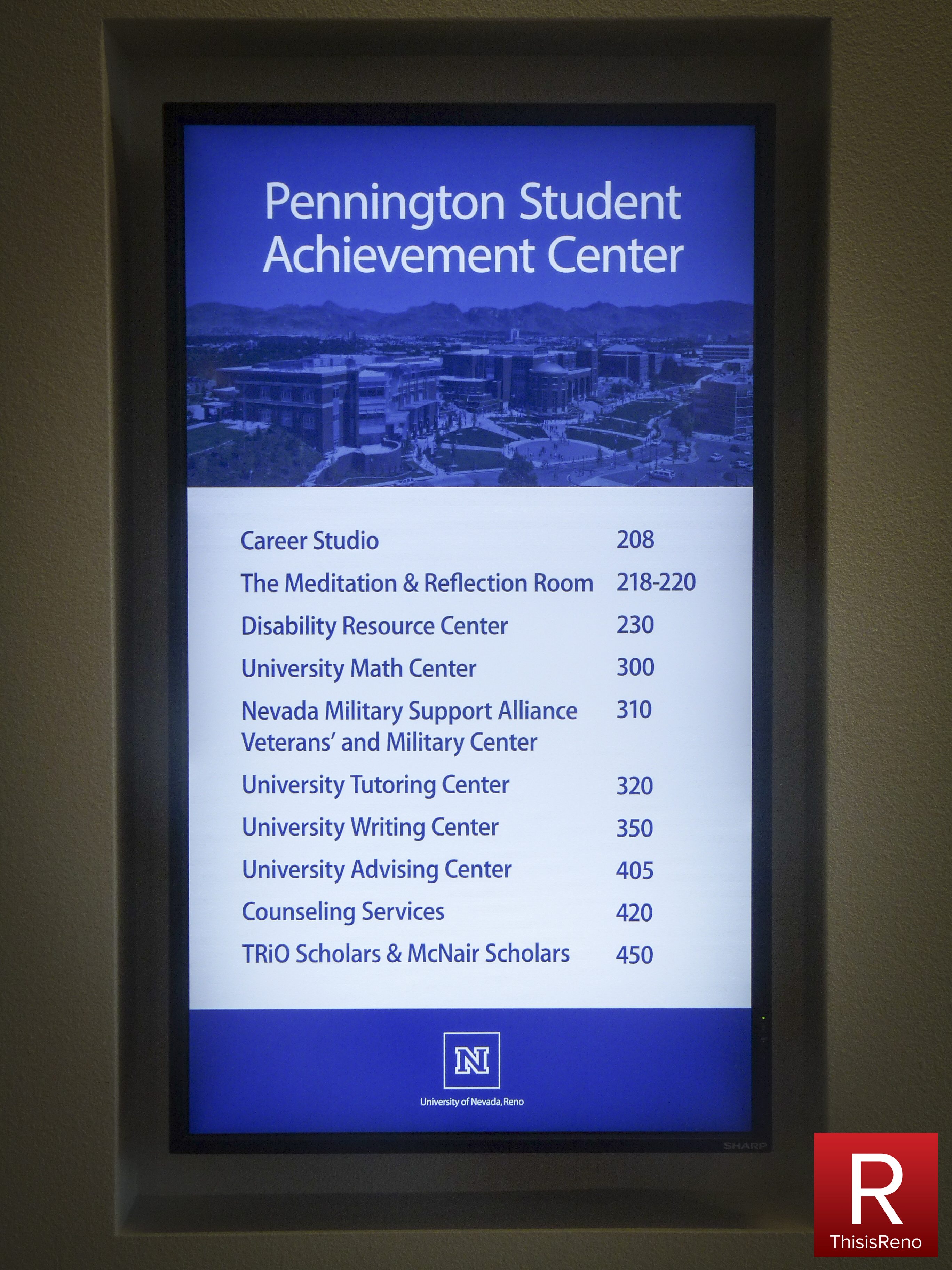 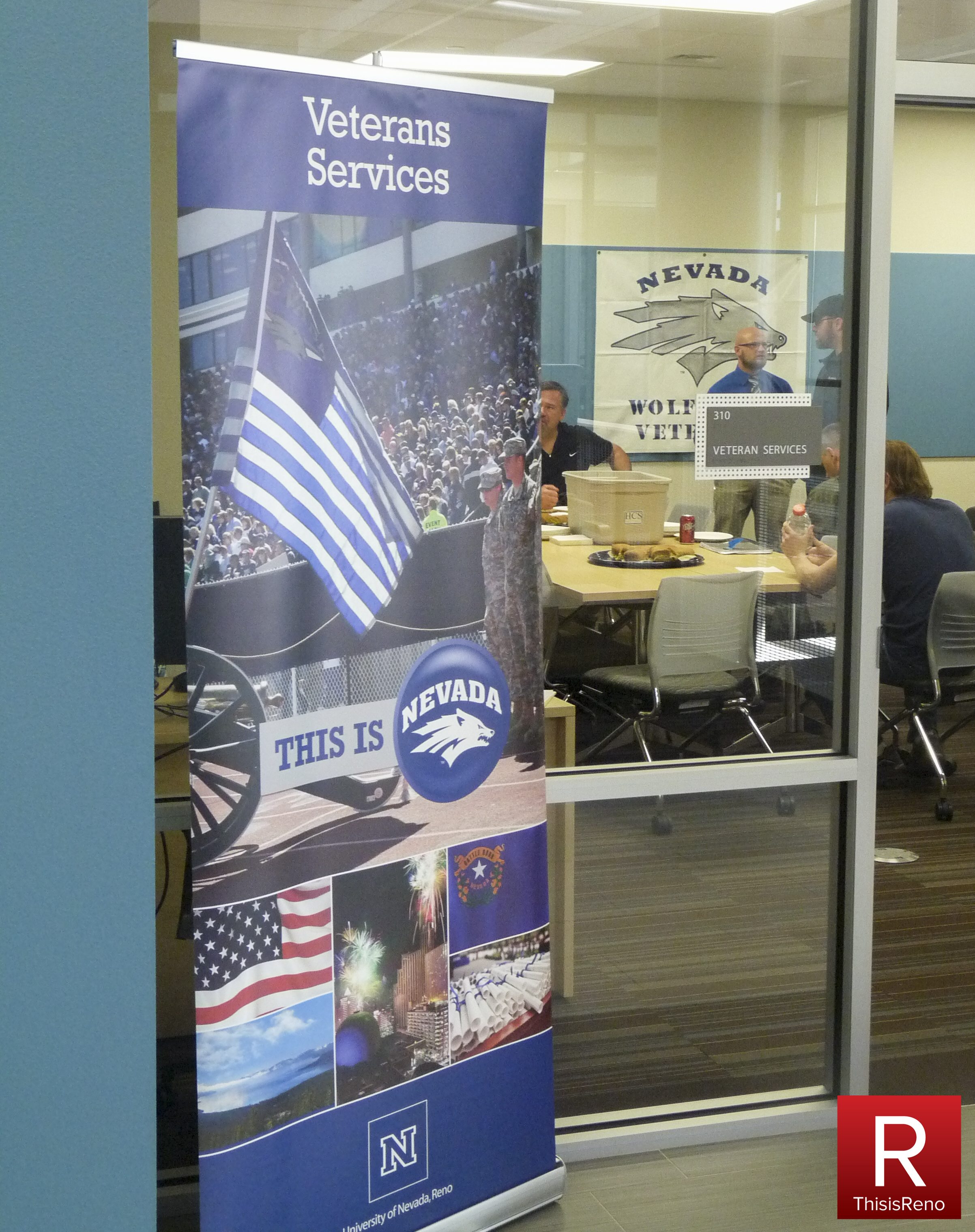 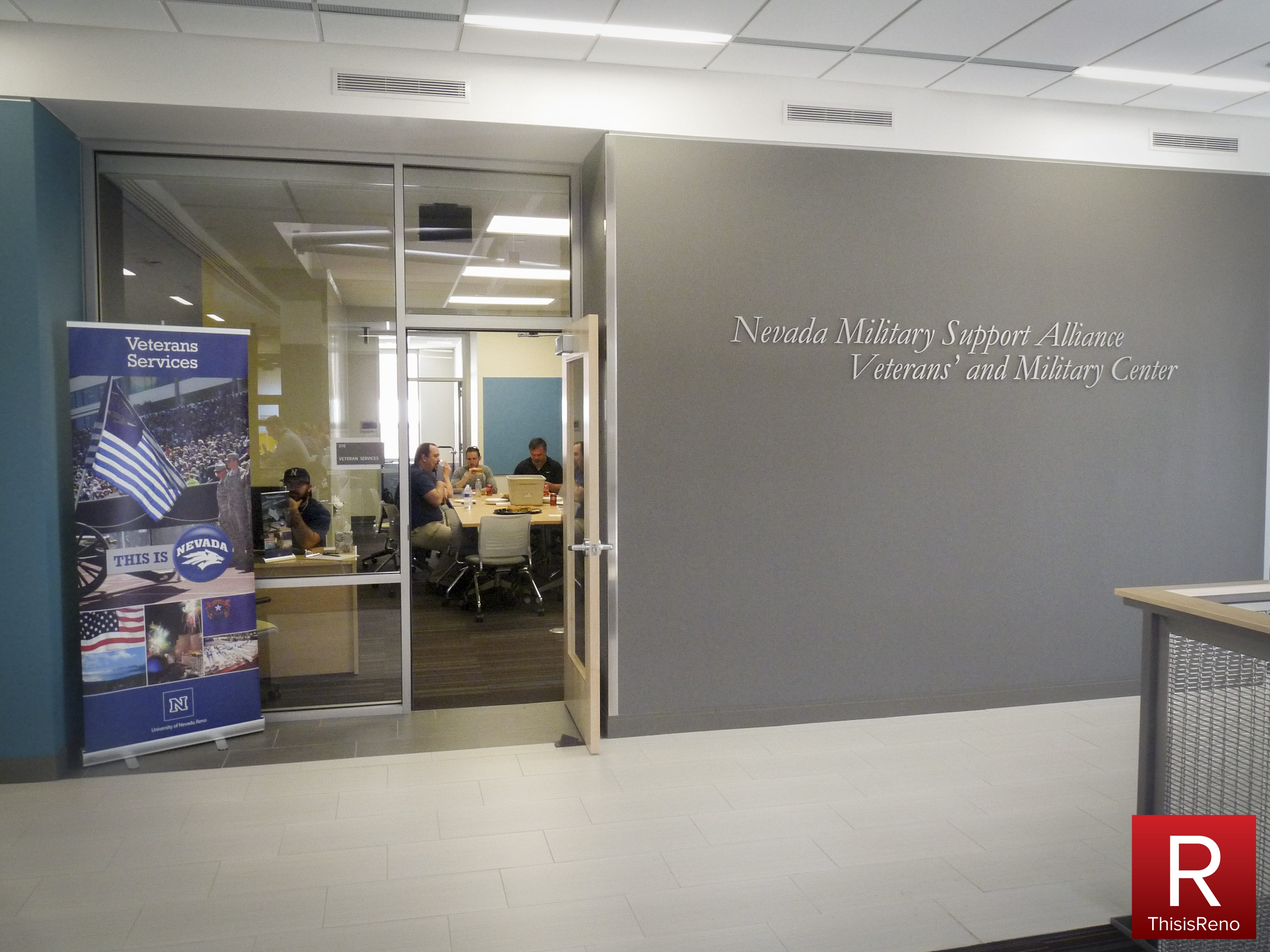 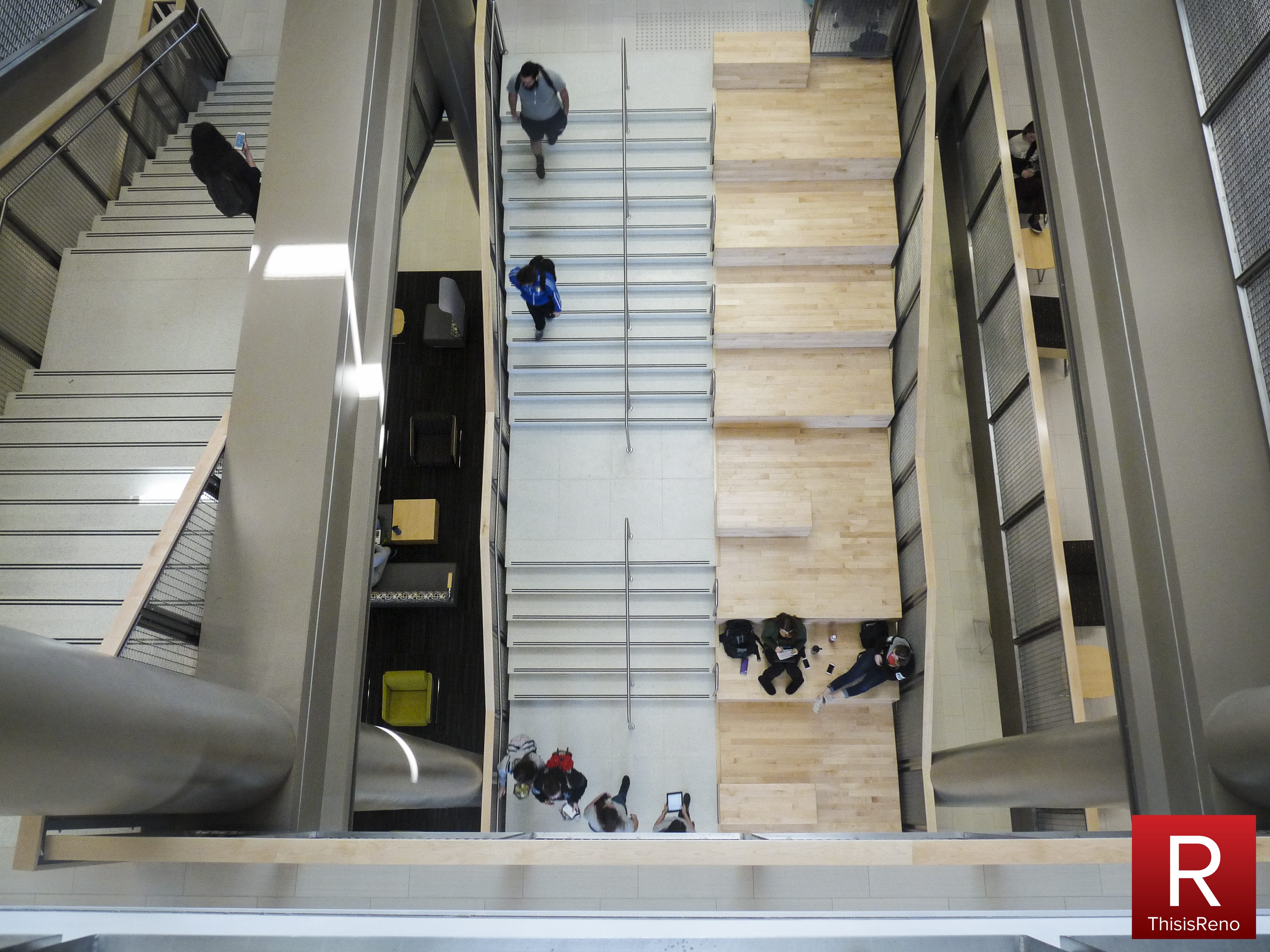 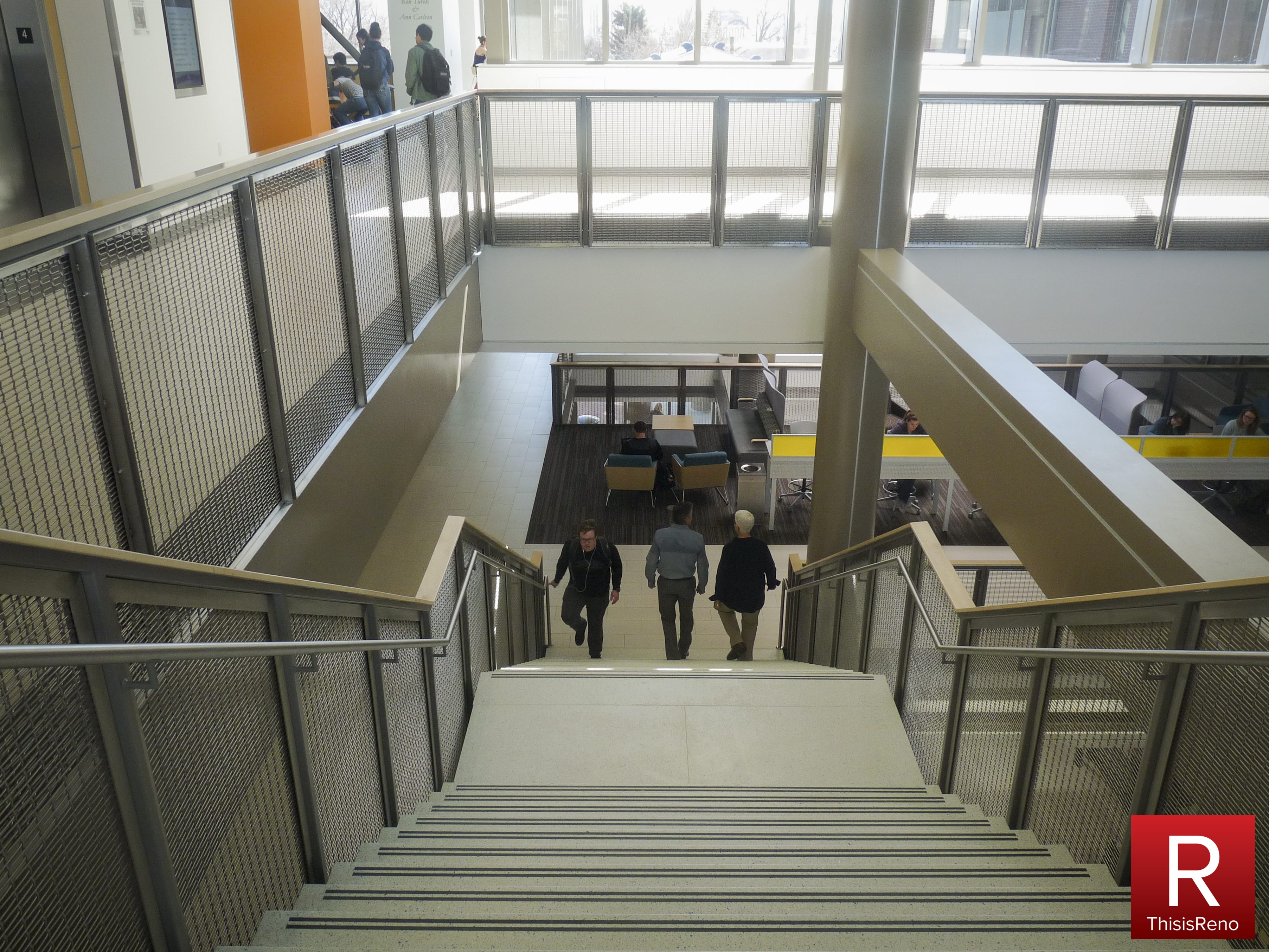 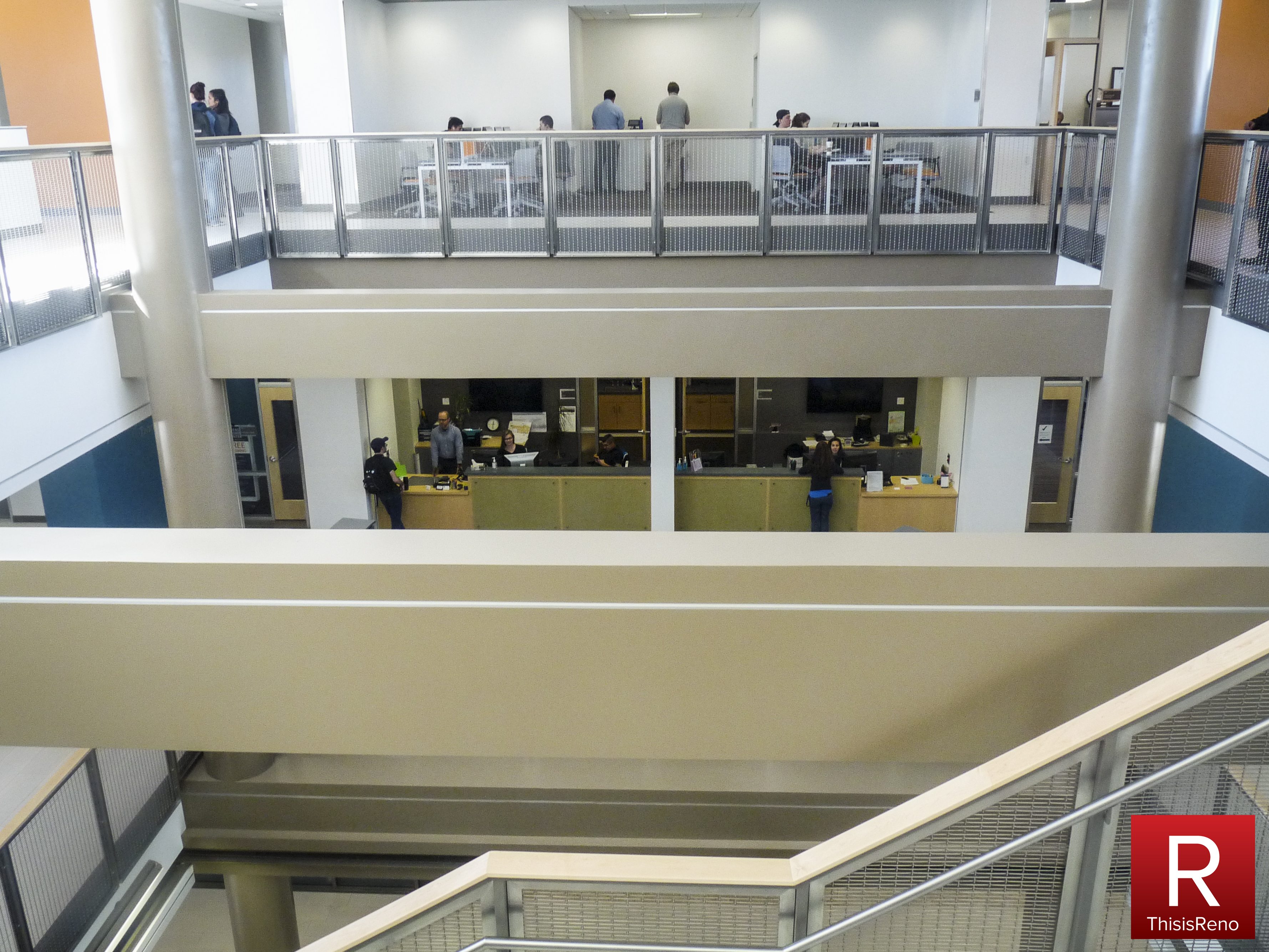 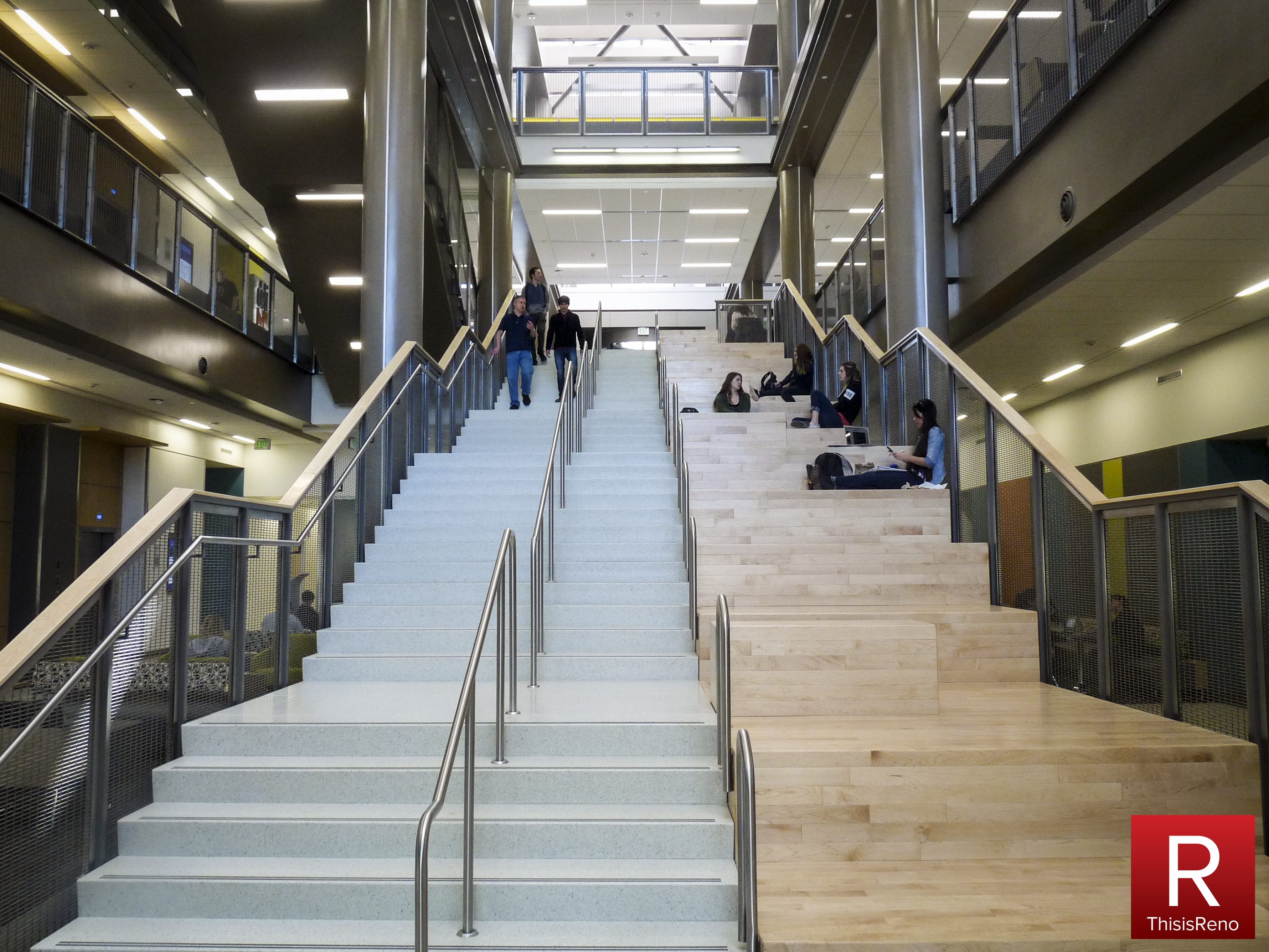 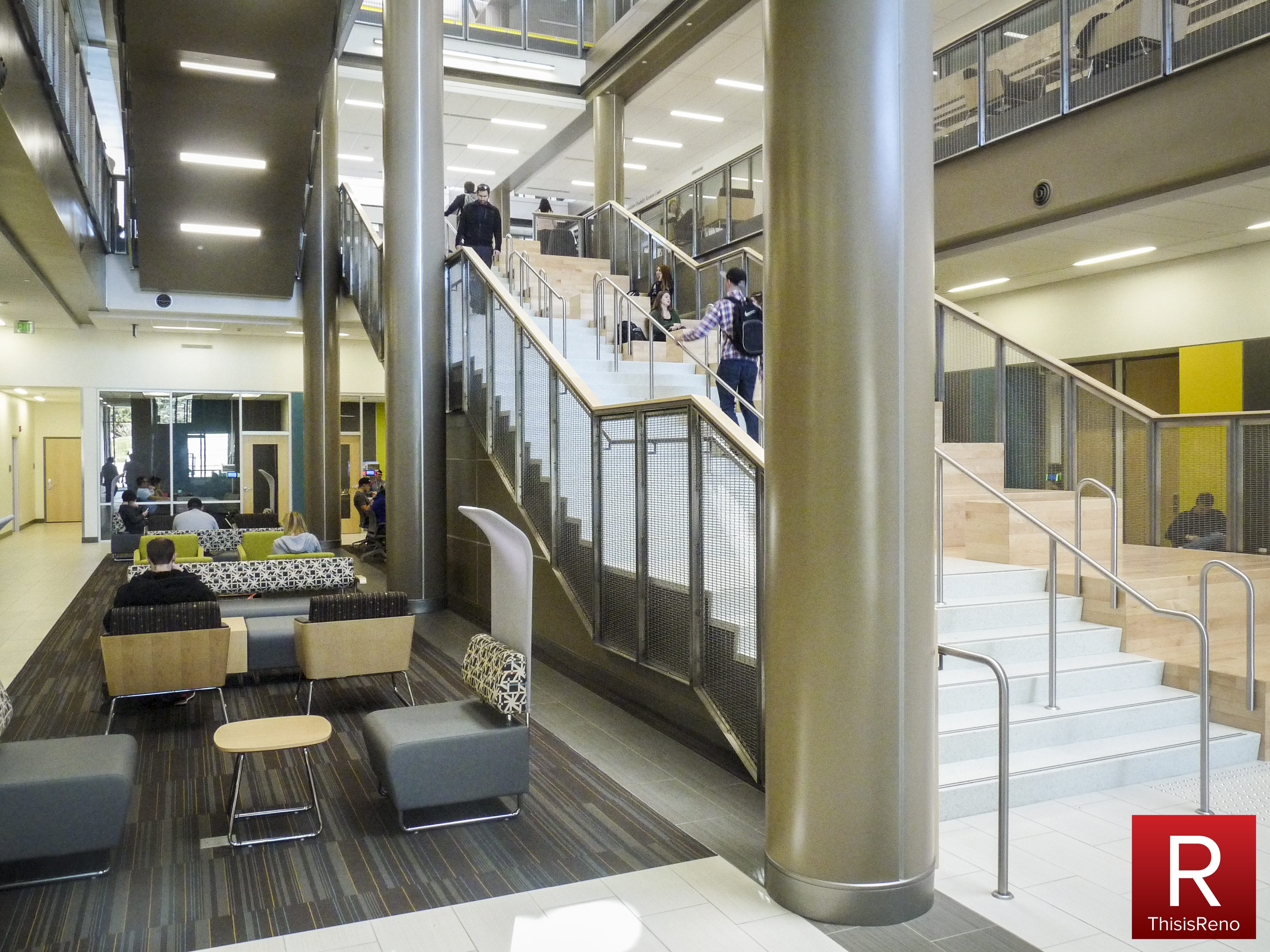 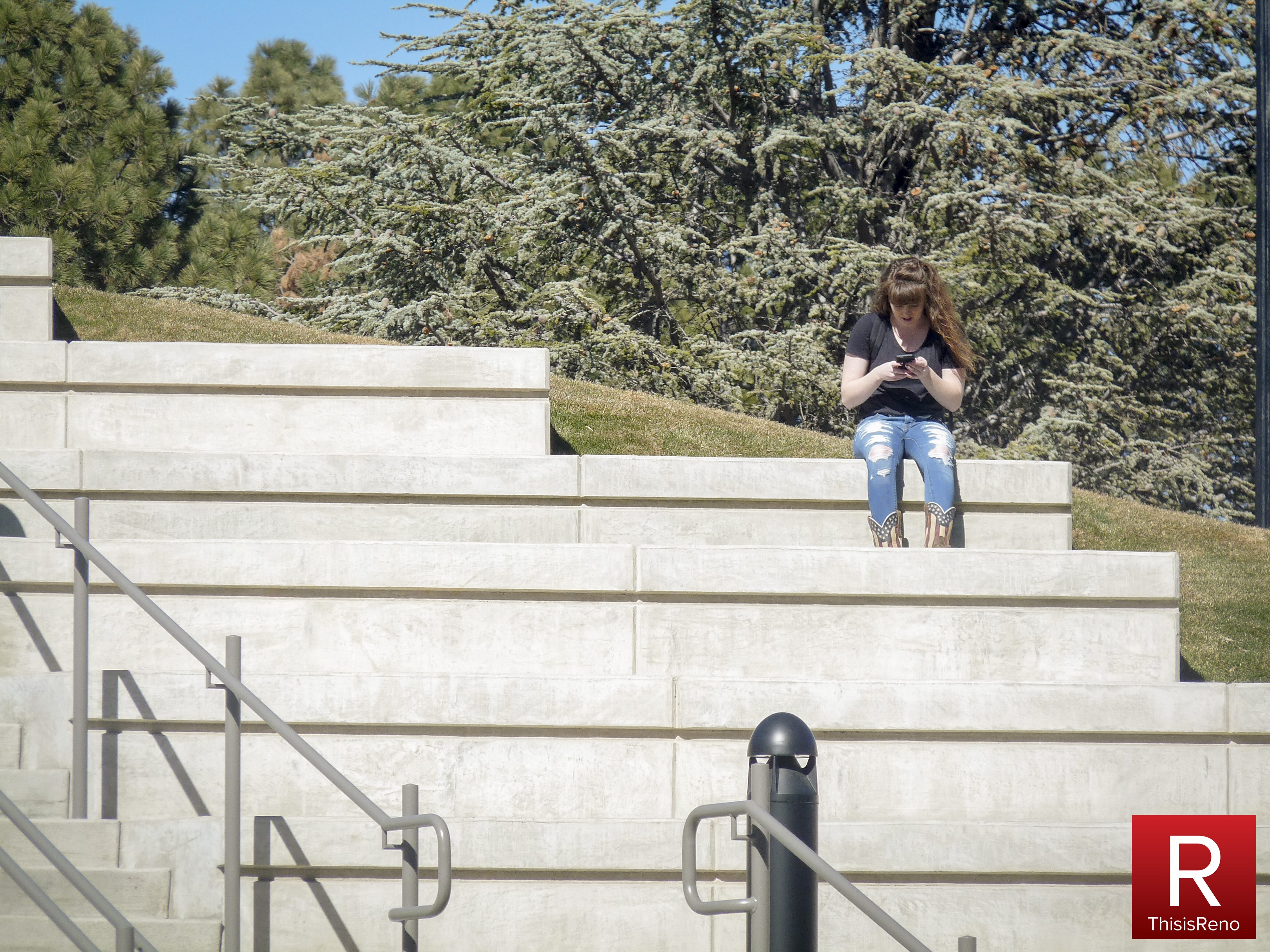 The William N. Pennington Student Achievement Center opened on Monday to the anticipation of many students and faculty on campus at the University of Nevada, Reno (UNR).

Designed to consolidate student services as well as provide additional workspace for the ever-increasing student population, the opening day was a success according to the director of the new building, Derek T. Furukawa, who is also the Director of Undergraduate Academic Advising at UNR. 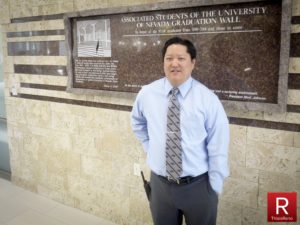 “Today has been good,” Furukawa said. “We have had quite a few students come into the building, which is really nice. We want to make it inviting for students to come in, hang out and not only do formal academic work, but informal academic work. It’s kind of a new bridge in figuring out what we [the university] are doing.”

Many students passed through on opening day, as the building also serves as a new thoroughfare connecting the old section of campus to the new, but many more stayed and toured the building or stopped on the “social stairs.”

“I like how it’s not like the library where you have to be quiet,” said Mariah Eckley, a 22-year-old nutrition major. “You still have a lot of people walking through, so it’s kind of busy, but you can still focus … these social steps are really cool. I’m excited, this will be my new go-to area.”

Students were also excited about the two high-tech classrooms in the building.

“The classroom was awesome,” said Kyle Lethcoe, 20-year-old biochemistry major. “There were 6 projectors spread out which gave a great view at any angle which I feel helped the learning process. The building and its resources were impressive.”

For student veterans like 27-year-old Gabe Kennedy, the transition between military and civilian life is often a rough one.

“It’s a culture shock,” Kennedy said. “You couldn’t create two different contrasting cultures if you tried. This is the medium ground, this is college, we’re bridging past our military careers, but we still are who we are and where we came from. This just gives guys that stepping stone.”

According to Terina Caserto, the director of Veteran Services at UNR, a series of focus groups with student veterans were conducted to find out what they wanted the space to be and the area was one of the most crowded parts of the buildings on opening day.

“We started talking to administration about (acquiring) space in 2010,” said Caserto. “Along the way there were a couple options that became available, but they really were not conducive for collaboration, nor were they spaces that helped with the integration of veterans on campus.”

The opening of the Student Achievement Center created a lot of buzz on campus, and passersby in general seemed to be excited about the new opportunities that the building offered, both academically and socially.

“The whole point of the center was to bring together all the resources that were scattered throughout campus into one collaborative space,” said 27-year-old student veteran, Gabe Kennedy. “You’re giving veterans an organic place to meet, so they can [participate in] student veteran groups or just be around like-minded individuals.”