By ThisIsReno December 22, 2015
A First Tee van with similar graphics as the trailer that was stolen. 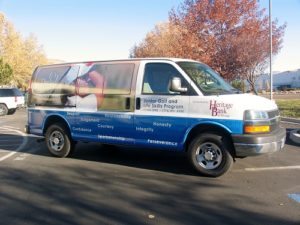 A First Tee van with similar graphics as the trailer that was stolen.

“After watching local news coverage on the theft of the First Tee of Northern Nevada trailer, a concerned citizen noticed a suspicious trailer covered with a tarp parked in the area of Pine Street and River Rock in Central Reno,” according to an RPD statement. “The citizen contacted Reno Police Dispatch and responding officers located the stolen trailer which was stolen from the nonprofit organization.”

Staff from First Tee was contacted, and they took an inventory the trailer, finding 90-percent of the equipment used by area youth was still inside.

The Reno Police Department said that it wants to thank the citizen for reporting the suspicious trailer in her neighborhood and local news for their coverage.

First Tee is a non-profit that helps enhance the lives of 7- to 13-year-olds by helping them establish goals, build self-esteem and create a sense of community.