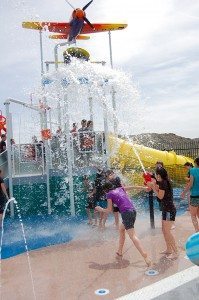 Washoe County staff has implemented several ways to reduce water use at Washoe County parks and facilities the past couple of years and results show it is working.

Cold Springs Park is the site of one of the Washoe County turf reduction projects which was completed in 2013. Since then, water use at the park has been reduced by 50 percent from 2013 to 2014. In 2015, the park is on track to cut back on water use by 50 percent yet again.

Water use at the Washoe County Administrative Complex was reduced by 21 percent from 2013 to 2014 and has saved 10 percent in 2015, by simply following the guidelines provided by the Truckee Meadows Water Authority for outdoor water use. The reduction was achieved by reducing irrigation run times and ensuring watering occurs during evening hours when temperatures are lower to retain moisture.

The North Valley Splash Park uses a recycled water system to serve more than 31,000 customers annually. According to the Truckee Meadows Water Authority, the average metered household utilizes 137,000 gallons of water each year. The splash park consumed 324,000 gallons of water this season which is equivalent to just under 2.5 households. The splash park remains a great way to save on water by having children playing at a splash park with recycled water rather than using sprinklers and pools at home.

“Washoe County will continue to evaluate its water use and where we can cutback or use water more efficiently,” said Washoe County Manager John Slaughter. “It is important we all be responsible with how we use water, not only during this dry period in Washoe County, but well into the future.”