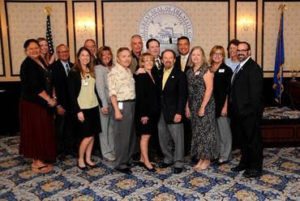 “The hardest thing for a veteran to do is ask for and accept help,” said James Snyder, a veteran who served in the U. S. Marine Corps. Snyder has been dedicating his time to aiding his fellow Marines and Veterans, predominantly through the Adopt a Vet Dental Program (AAVD).

Snyder was recently honored as Veteran of the Month for August by the Nevada Department of Veteran Services and credits AAVD with helping him smile again.

“I’m a true success story of the Adopt a Vet Dental program,” said Snyder. “My job and my health fell apart when I was faced with a disease that affected my teeth, jaw and nerves. I was in pain everyday and my teeth were cracking so badly that most had to be removed. I was on the wait list for the program for 18 months and when my time came it was hard for me accept that something good was about to happen and I also had a hard time asking for charity, as I had worked hard all of my life.”

“Jim is an invaluable asset to AAVD and an inspiration to other veterans when he shares his personal story during the program orientation and AAVD presentations to other veteran organizations,” said AAVD Founder Linda Haigh.

In addition to serving AAVD, Snyder helped establish a fundraiser for the Nevada Honor Flight, arranging no-cost travel for eligible WWII veterans to visit memorials. Snyder was honored at the Veteran of the Month ceremony at the Governor’s Mansion in Carson City. Governor Brian Sandoval presented Snyder with his award in front of an audience of family, friends, associates, veterans and their supporters.