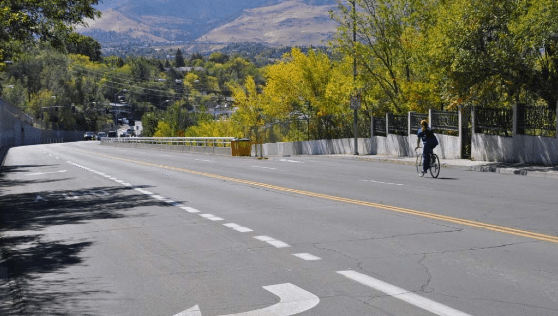 The RTC is starting road improvements to Keystone Avenue this week.

Beginning Wednesday, and lasting about two weeks, RTC is creating new bike lanes, replacing old sidewalks and travel lanes will be reduced to two lanes — one for each direction.

“The improvements will create a Complete Street, which is a street with separate spaces for vehicles, pedestrians and bicyclists,” said RTC in a statement issued today. “Complete Streets give people transportation options and have been shown to reduce crashes and enhance safety. The project also includes a flashing beacon at the intersection of Kings Row and Keystone Avenue to alert drivers to crossing pedestrians.”

Crosswalks will be installed near Keystone Avenue and Gear Street, and pedestrian ramps near Kings Row will be brought into compliance with the Americans with Disabilities Act (ADA).

A slurry seal will be applied from Seventh Street to McCarran Boulevard, and the bike lanes and sidewalks will extend from University Terrace to Coleman Drive.

The road improvements were developed in conjunction with the Reno City Council and citizen input. The project, estimated at $350,000, is being funded from a local fuel tax.