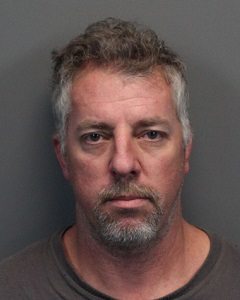 n November 4, 2014 the Sacramento County Sheriff’s Office Major Crimes Bureau went to the Reno Police Departments Crime Suppression Team (CST) and provided them with information about a wanted fugitive who was possibly in the Reno area.

The CST team was told by Sacramento detectives that a white male from Sacramento had taken a dog from a shelter, attached a 12-pound bowling ball around the dog’s neck and threw it into the Sacramento River where the dog drowned. A microchip that the shelter had placed on the dog led Sacramento investigators to Meek. Meek was also described by the Sacramento detectives as being very violent and that two felony extraditable warrants had been issued for his arrest.

Sacramento Major Crime Bureau Detectives along with Reno CST officers located the suspect at a hotel, in the 800 block of South Virginia Street shortly before 4:30 pm, and placed him into custody for his warrants. William Meek was arrested for two fugitive from justice warrants from the Sacramento and Yolo County Sheriff’s Office. The first warrant was related to charges stemming from one count of felony malicious maiming of animals $50,000.00, and the second was for possession of controlled substance, No Bail.

For more information on this story, visit: http://lat.ms/YL5Ata