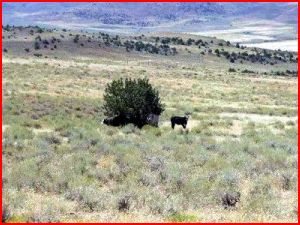 ELKO, Nev. — The Nevada Cattlemen’s Association, Nevada Farm Bureau, Nevada Department of Agriculture and affected area ranchers are offering a reward of $7,500 for the arrest and an additional $9,000 for the conviction of the person or persons who maliciously shot livestock in the Suzie Creek area of Elko County around the middle of September.

Four head of livestock were killed, and 14 other cattle were wounded by gunshot near Elko.

This type of malicious act is considered a felony punishable by imprisonment and a large monetary fine including restitution.

The Nevada Cattlemen’s Association, Nevada Farm Bureau and Nevada Department of Agriculture are confident the perpetrators of these senseless acts of cruelty will be caught.

With 87 percent of the land in Nevada under federal management, and often very remote and hidden, these organizations are asking the general public, hunters and outdoor recreationalists to report suspicious activities that may lead to the arrest and conviction of those responsible for these types of activities.