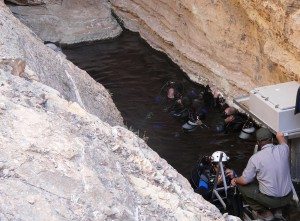 Scuba divers conduct fish research at Devils Hole, an isolated geothermal water-filled limestone cavern in the Nevada desert. The aquifer-fed pool in the Ash Meadows National Wildlife Refuge, a detached unit of Death Valley National Park, is the habitat for the only naturally occurring population of the endangered fish. It is an extreme environment, with water temperatures and dissolved oxygen concentrations near their lethal limits for fish. Photo by Scott Tyler, University of Nevada, Reno.

Climate change is hurting reproduction of the endangered Devils Hole pupfish, threatening the survival of this rare species that has numbered as few as 35 individuals, new research by the University of Nevada, Reno and Desert Research Institute shows.

Scientists report that geothermal water on a small shelf near the surface of an isolated cavern in the Nevada desert where the pupfish live is heating up as a result of climate change and is likely to continue heating to dangerous levels.

The hotter water, which now reaches more than 93 degrees, has shortened by one week the amount of time pupfish larvae have to hatch during the optimal recruitment periods.

The recruitment period is the 10 weeks during which water temperatures are conducive to egg hatching and sufficient food is available to sustain the newly hatched larvae.

This decrease contributed to the decline of the adult pupfish population, according to a scientific paper published in Water Resources Research, a journal of the American Geophysical Union.

“Climate change is making it harder for the Devils Hole pupfish to survive and has most likely contributed to the decline we have seen,” said Mark Hausner, a hydrologist at the Desert Research Institute in Las Vegas, Nevada, and lead author of the paper, “Life in a Fishbowl: Prospects for the endangered Devils Hole pupfish (Cyprinodon diabolis) in a changing climate.”

Devils Hole, in the Mojave Desert, will also likely become less hospitable to the pupfish as climate change continues to warm the planet, Hausner said. The new research found that increasing temperatures will likely reduce the pupfish’s optimal recruitment period by another two weeks by mid-century. Higher temperatures could also affect the availability of food for young pupfish, leading to fewer adult fish.

“While the population of the pupfish has declined, we are hoping they are in a period of recovery,” Kevin Wilson, aquatic ecologist and a member of the research team from the Pahrump Field Office of Death Valley National Park, said. “Climate change is threatening the already small population size.”

Devils Hole is a water-filled limestone cavern in the Ash Meadows National Wildlife Refuge, a detached unit of Death Valley National Park. It is an extreme environment, with water temperatures and dissolved oxygen concentrations near their lethal limits for most fish.

The iridescent blue, one-inch-long pupfish have lived in the top 80 feet of the water-filled cavern for more than 10,000 years. 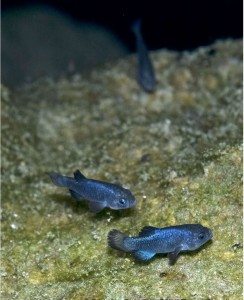 “This is a fish that does live in a fishbowl, an incredibly hostile fishbowl, and you can’t move the fishbowl,” Tyler said. “This is a species that can’t adapt or change or leave to go to a better environment, though it’s most likely gone through tremendous genetic bottlenecks in its more than 10,000 years of evolution.”

Tyler and his team, with grants from the National Park Service, Nevada Department of Wildlife and the Death Valley Natural History Association, used fiber-optic cable distributed temperature-sensing equipment, pioneered by Tyler, to monitor temperature changes in the more than 400-foot deep geothermal fissure in the desert.

They used current and historic data to create a numerical model, using the same equations used in fluid dynamics and aerodynamics for designing Formula-one race cars and airplane wings, to chart thermal mixing of the water within the aquifer.

The scientists combined climate projections, models of water circulation in the deep, water-filled fissure, and food web ecology to understand how climate change could affect the ecosystem within the pool.

The model estimated optimal pupfish spawning periods based on projections about how much the environment will change and how much food will be available under different climate scenarios.

“The techniques used to model the impacts of climate change for the Devils Hole pupfish can be applied to other species in other desert locations to see how they might respond to the changing climate,” Tyler said.

The research team includes Kevin Wilson and Bailey Gaines of the Pahrump Field Office of Death Valley National Park; Francisco Suárez from the Pontifical Catholic University of Chile; and Gary Scoppettone of the Western Fisheries Research Center of the United States Geological Survey.

The American Geophysical Union posted a similar story about the research on their GeoSpace blog at on the AGU Blogosphere at http://blogs.agu.org/geospace/2014/08/26/heating-fishbowl-climate-change-threatens-endangered-devils-hole-pupfish/.

Founded in 1874 as Nevada’s land-grant university, the University of Nevada, Reno ranks in the top tier of best national universities. With more than 19,000 students, the University is driven to contribute a culture of student success, world-improving research and outreach that enhances communities and business. Part of the Nevada System of Higher Education, the University has the system’s largest research program and is home to the state’s medical school. Bringing outreach and education programs to all Nevada counties and home to one of the largest study-abroad consortiums, the University extends across the state and around the world. For more information, visit www.unr.edu.

Desert Research Institute (DRI) is the environmental research arm of the Nevada System of Higher Education. DRI conducts cutting-edge applied research in air, land and life, and water quality across Nevada, the United States and on every continent. Learn more at www.dri.edu.