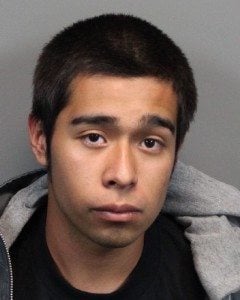 WCSO–Washoe County Sheriff’s Office and North Lake Tahoe Fire Protection District announced today that Ramon Mendoza Valdez, age 20, of Incline Village and two juveniles have been arrested on charges related to an arson and graffiti incident that occurred on Wednesday evening at a business located on the 900 Block of Tahoe Boulevard in Incline Village.

At approximately 7:50 p.m. on Wednesday, July 16, units from the North Lake Tahoe Fire Protection District and Sheriff’s Office Deputies responded to a report of a fire at the “La Casona” building located next to the Raley’s Shopping Center at 930 Tahoe Boulevard, Incline Village. Additional units from the North Tahoe Fire Protection District (California) and CAL FIRE assisted.

“After the fire was extinguished, investigators found evidence of arson at the scene,” Washoe County Undersheriff Tim Kuzanek said. “The North Lake Tahoe Fire Protection District worked with our Patrol Division to conduct a joint arson investigation which identified Ramon Valdez as the primary suspect.”

Valdez was arrested without incident on Thursday, July 17, 2014 and has been charged with two counts of Arson in the First Degree and one count of Arson in the Third Degree along with charges of Graffiti and Contributing to the Delinquency of a Minor. He is currently being held in the Washoe County Detention Facility.

“This incident has been the subject of justifiable concern from the Incline Village Community and I want to express my appreciation to the investigators from the Fire Protection District and our Patrol Division for resolving it so quickly,” Undersheriff Kuzanek said.