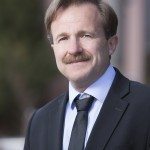 “With his impressive credentials as a researcher and teacher, and his administratively oriented experience as department chair of Biological Sciences and past chair of the Faculty Senate, David brings a well-rounded combination of skills and experience to this role,” Kevin Carman, the University’s executive vice president and provost, said. “He also brings great enthusiasm, and a deep appreciation for and understanding of the integral role of graduate-level studies in the university environment.”

The Graduate School oversees graduate education across the University, including the broad range of more than 100 master’s and doctoral degree programs hosted through the University’s colleges, schools and academic divisions. Zeh sees the role of the school as providing “a transformative educational experience that enables students to successfully achieve their career goals, while serving as a catalyst for transforming the state’s economy into one that is diversified and knowledge based.”

Zeh, who begins his role as vice provost for graduate education and dean of the Graduate School April 1, looks forward to creating “a 21st century graduate experience that values and promotes diversity, exploits the power and promise of technology, and prepares the next generation of Nevadans to help re-establish the nation as the world’s leading economy, one that values initiative, hard work and personal integrity.”

Zeh takes over the role from Marsha Read, who has served in the dual roles of vice president for research and dean of the Graduate School since 2008. Read, who received the University’s 2013 Distinguished Service Award, is retiring in June 2014.