Downtown After Dark – a photography exhibit of downtown Reno 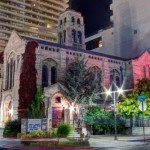 LIBERTY FINE ART GALLERY NEWS RELEASE – Richard Bailey is presenting a show of fine art photography at Liberty Fine art Gallery for the month of December. A reception with the artist is December 5, from 6:00 p.m. until 9:00 p.m. at the gallery and is open to the public.

According to Bailey, “This series is part of an ongoing project attempting to reproduce what I see at night in an urban environment with digital photography. Historically, photography has not had the ability to capture the full range of light and detail that humans see. Photographers have a long history of trying to find ways to produce photographs that mimic what humans see, Ansel Adams and his work of Yosemite is a well-known artist that made innovations in photography in his attempts to create a print that reflects how humans see. This is part of my ongoing attempts to capture images that mimic what humans actually see.”

Richard was born in 1967 in Fallon, NV to parents with a strong interest in photography. He received his first camera about the age of seven, an old Kodak Brownie 620 camera, an early point and shoot camera. Richard has been pursuing artistic photography endeavors since he started in photography. He and his wife, Kelley, decided to focus on photography as a business and launched A Moment of Time Photography in 2013.